Happy Canada Day to my friends up north!  July 1st is the 144th year for the nation of Canada since confederation of the country.

I’ve actually spent two Canada Days in Canada in my lifetime.  Once in Regina, Saskatchewan and another time in Vancouver, British Columbia.  The second time in B.C. was really cool because I spent the entire weekend with friends.  We had a huge picnic feast and fun day.  There was some sort of festival in the Granville Island neighborhood.  At night we travelled near Lion’s Gate to view the fireworks display.  We almost had too much fun!

Anyway, for the benefit of my non-Canadian cohorts, July 1st, 1868 is when Great Britain created the Canadian national government.  It was called the British North American Act or the BNA.  It proclaimed “One dominion under the name of Canada”.  The holiday was originally called “Dominion Day”.  The name change to “Canada Day” happened in 1982 by an act of Parliament.  One interesting factoid about the holiday is that it’s always celebrated on July first, unless the first falls on a Sunday.  In that case, Canada Day is celebrated on Monday the second.  At any rate, Canada Day is celebrated in much the same manner as U.S. residents celebrate Independence Day.

Because I can’t travel to Canada today, I decided to make up a couple of patriotic Red and White flower arrangements to commemorate Canada Day.

The first one utilizes a 1950s attitude with a space age strawberry styled container/stand with brilliant white roses.  It evokes a feeling of both retro and futuristic sensibility.  This one was fun and playful, just like the day is meant to be.
This second one uses an antique white Red Wing vase and a posey of various red flowers.  I figured that Red Wing, Minnesota was sufficiently close to Canada to pass muster.  I wanted to get a feeling of something that might decorate a Canadian home in the early part of the 20th Century.  Something brilliant, yet a bit sedate and understated. 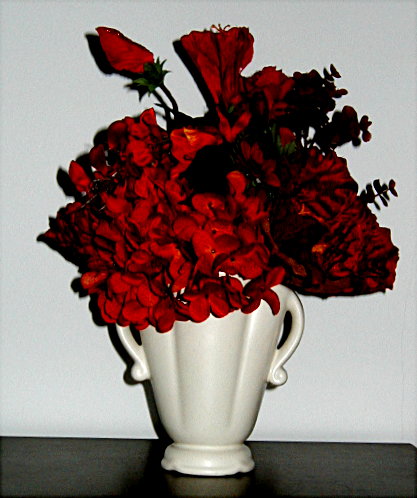 To my friends in B.C., Saskatchewan, Manitoba and Ontario, I wish you a most happy Canada Day.

The Blue Jay of Happiness wishes he could warble out a hearty “Oh Canada!”, but he can’t.  He can only call out “jeer, jeer”.

An eclectic guy who likes to observe the world around him and comment about those observations.
View all posts by swabby429 →
This entry was posted in cultural highlights, Floral Arts, Friendship, History, Vintage Collectables. Bookmark the permalink.