Dad wanted some help checking for leaks and pests in the basement of an old house near his home.  This has been a wet year, so he was worried about the integrity of the house’s foundation.  We would need to move a few things around and clean up the area.  Cleaning out a basement is not something many people enjoy.  Especially if the basement is part of a very old farmhouse.

The basement is fine, if you overlook the cobwebs, mildew and dampness.  I stumbled upon an old box filled with Atlas brand canning jars and some old books.  The stuff was old, so my interest was piqued instantly.  The canning jars appear to be collectable but not particularly valuable.

Among the few books, one warranted closer scrutiny. It measured about 12 by 9 inches.  It was covered with dust, fungus and cobwebs.  I set it aside then wiped off the worst of the filth.  I found out that it was an antique geography textbook.  I brought it outdoors so I could clean it up and finally open the cover.

*Barnes’ Complete Geography, Nebraska Edition* is the title.  Inside, I found out it was printed in 1885 by the A.S. Barnes Company of New York and Chicago.  The author is James Monteith.

One of my greatest pleasures is to study maps, new and old.  But old maps are especially fascinating.  In the overall scheme of the world, most people don’t know nor much care about the state of Nebraska.  They just don’t know that you don’t need to live in New England or California to have an interesting home state.  This old geography textbook features a few extra pages regarding Nebraska because it was intended for use in Nebraska school systems. 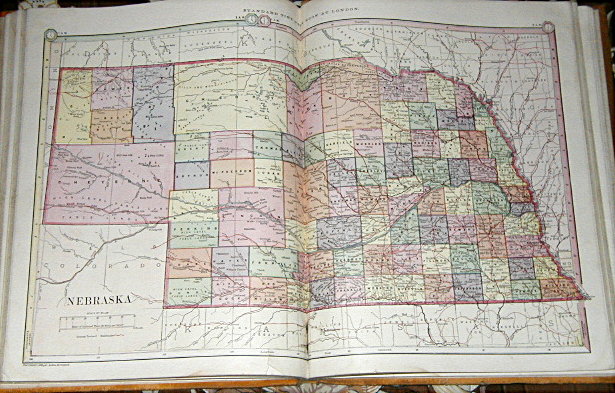 The state map shows that all of the counties had not yet been established.  In the panhandle, was a large rectangular county shaded in pink that looks out of place.  Cheyenne County covers half of the panhandle area on the 1885 map.  Also, Hooker County, just south of Cherry County at the top of the map, used to be the unincorporated county called “Blackbird”. The rest of the counties appear as they do today.  This feature, alone makes for interesting contemplation.

Presently, the old Cheyenne County has been divided into seven counties. Scottsbluff, Banner, Kimball, Morrill, Garden, Duel and the new, much smaller Cheyenne County.  So, all together, eight counties have changed between now and 1885.

I like to check vital statistics of an area.  In 1885, the entire state of Nebraska had 740,645 people.  Our largest city, Omaha, had 61,835 residents.  My home county, Madison, had a total of 9,871 residents spread throughout the towns of Norfolk, Madison and other small villages and farmsteads.  Madison County evidently had towns that don’t exist anymore.  These will need further investigation when and if I get more time.

I spotted the now defunct towns of Deer Creek, Munson, Chloe and Kalamazoo.  I had no idea there had even been a Kalamazoo, Nebraska until now.  Hmm!

One part of the book gave me a more personal glimpse into the past.  The blank inside page had been written on with pencil.  14-year-old Dewey F. Roseborough of Tilden placed his identification there. He lived in or near Tilden, Nebraska.  He attended Madison County’s Tilden School.  He was 4’10” tall.  He must have been short of scratch paper one day because there is an arithmetic problem scribbled on the page.

The remainder of the geography book is every bit as interesting.  I’ll be studying the maps and the text of the book for quite awhile.  This old book is really an old treasure.

The Blue Jay of Happiness wishes that Nebraska’s founding fathers had named one of the counties after blue jays.

An eclectic guy who likes to observe the world around him and comment about those observations.
View all posts by swabby429 →
This entry was posted in cultural highlights, History, Hometown, Vintage Collectables, Youth. Bookmark the permalink.