For years, I’ve never understood the mass disconnect between Thanksgiving Day and the remainder of the holiday season. Only one tiny day of the year is officially devoted to gratitude and thankfulness for our immense personal and national bounty.

Many of my acquaintances don’t even spend the whole of that day being grateful for all the wonderful blessings in their lives. Much of their time is spent strategizing how they can be first in the door at the local big box discount store in order to snap up as many bargains as possible. People who were supposedly expressing their gratitude for the overabundance of plentitude in their homes one day, are trampling each other, sometimes to death, in order to save a couple of bucks on some cheap sweatshop manufactured stuff the next day. 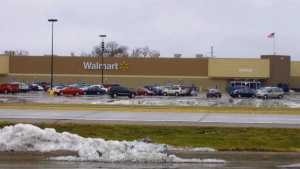 This activity is all done in the name of peace, love and charity to honor lofty religious concepts. We have even been told that it is our personal responsibility as good consumers to go shopping in order to make our nation viable and economically healthy. We are reminded several times each day that we are consumers. We are told that we can make a difference just by where we shop and what products we purchase.

Advertising campaigns have informed us that we can make a real political difference in our world simply by being informed consumers. But wait. The United States Constitution, The United Nations’ Charter, the governments of the rest of the world’s countries are not set up to govern on behalf of consumer choice by informed consumers.

We’ve been sold a bill of goods. Just as “reality television” doesn’t depict any sort of normal reality, “consumer choice” doesn’t equal any sort of responsible mode of governing. Consumption of stuff just like official standards of behavior fall under the authority of those who govern. Rarely, if ever, is it the other way around.

Accepting the label “consumer” is an act of degradation. Consumer power is imaginary albeit seductive to the mind. Thinking that you’re a consumer distracts us from the only actual, legal power we can exercise to confront corporate rule and abuse and the ruination of our planet. There are real and urgent problems that need to be addressed. By only being “wise” consumers, we only add more wealth and power to those who convince us to be consumers.

The only way to address and solve our nation’s and world’s problems is to reclaim our status as citizens. Our constitutions and legal documents fully, and officially recognize the rights and obligations of citizens. Responsible, thoughtful citizens are active and knowledgeable where it all counts. Consumer’s are merely passive.

Who decided that economic trade is to be regulated in favor of the corporate powers that be? Who decided that it’s OK to degrade the environment? Who decided to repeal human rights and workers’ rights regulations? Who decided which community values are to be upheld? Did you decide that by your choice of laundry detergent or selection of automobile brand?

As consumers, we don’t formulate events and decisions, we only react or respond. Consumption is a passive activity. Those decisions were not consumer demand formulated. The erosion of rights and values were decided by politically active people.

Like it or not, the ultimate say so about how we treat the earth and our fellow human beings is political. Just because politics may seem repugnant and somehow “negative” to us, doesn’t excuse us from paying heed to the workings of it.

Most of the time, even as voters, we act as consumers. We passively believe whatever politicians would have us believe. Then, if we even make the effort, you and I go to the polls and choose either brand R or brand D perhaps there might even be a new and improved brand I for variety. Voting for a candidate or ballot issue is only the final stage in power.

Real political/citizen power comes into play before the final choices are presented for voting. The people who exercise real power have personal, power and economic reasons to monopolize political power. They are active daily in the nuts and bolts of governmental workings. The key word is “active”.

If the watchdogs and citizens are coaxed to take a backseat as consumers, then the residents in the country will just passively go about their daily lives until something basic goes very, very wrong. Then it’s nearly too late. Those in power will flex their consolidated muscles to lead consumers around by the rings in their collective noses. Then all that will occur is complaining by the shoppers.

So, what will it be? Consumerism or citizenship? It’s up to you and me.

The Blue Jay of Happiness likes to hold some power in reserve for times of crisis.

An eclectic guy who likes to observe the world around him and comment about those observations.
View all posts by swabby429 →
This entry was posted in Controversy, Politics and tagged citizenship, consumerism. Bookmark the permalink.