As a nine-year-old schoolboy, I remember the lead up to Valentine’s Day as time of learning about peer acceptance and a real world reminder of pecking order.

Everybody in my fourth grade class was assigned the task of preparing a Valentine drop-box.  Each of us brought a shoebox from home to school.  We then selected red and white construction paper that we used to cover the box and lid.  A slot was carved out of the center of the lid to accomodate the Valentine cards from our little classmates.  The paper covered box could be decorated with tempera paints or cutout designs, usually heart shaped designs were used.  We made sure to print our names on one side of the box, then the boxes were placed on the top of each kid’s desk. 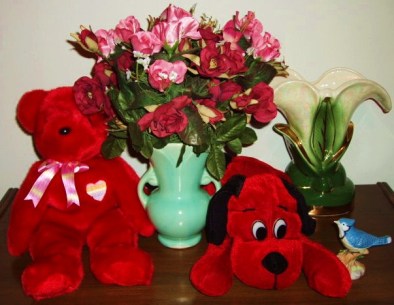 That evening, I tore into the plastic bag that contained dozens of simple, cutout Valentines.  The miniature cards depicted puppies or kittens with red bows around them or cutsie-pie little girls and boys or a cupid.  The captions were generally asking someone to “be mine” or “be my Valentine”.  I made certain that each kid in the classroom got a card from me.

I knew of a few kids who came from families that couldn’t afford to buy the little cards. I also was aware that some classmates were well-to-do.  A few of them also gave cards to each classmate except that their close pals were given expensive, regular greeting cards.  I didn’t expect to get Valentines from everybody, but still, I enjoyed writing my name on my share and sealing them inside the tiny envelopes.

The first activity on Valentine’s Day was the distribution of the cards.  The teacher lined all 32 of us up in front of the class, then we walked single file in front of each row of desks, dropping our cards into the appropriate boxes.  After we had finished snaking through the classroom, we sat at our desks.  The teacher then gave us permission to open our boxes to claim our tokens of friendship.

I think I received 15 or 16 Valentine cards.  Some kids only got two or three while the popular kids got 25 to 30 cards.  I was glad that I was among the few kids who made sure the “outcaste” kids had at least something to read from their boxes.  I sure felt happy to find that I got a nice card from one of the popular girls and two from a couple of the popular boys.

That was the last year of Valentine exchanges I remember from my school days.  Fifth and sixth graders were exempt from that practice.  By junior and senior high school, Valentine’s Day card exchanges became much more personal, extracurricular gestures.  By that time, most of us had outgrown “puppy love” and crushes.  We had more serious, romantic thoughts in mind.

The Blue Jay of Happiness wants you as his special Valentine.

An eclectic guy who likes to observe the world around him and comment about those observations.
View all posts by swabby429 →
This entry was posted in cultural highlights, Friendship, Youth and tagged children, peers, Valentine's Day. Bookmark the permalink.

4 Responses to Be My Valentine