“War is peace.”  Probably one of the most famous sentences from George Orwell’s novel *1984.  The book was meant as a warning about the very real possibility of a distopian future for our world.  Instead, it seems to have become a user’s manual for those of us who wish to advocate for and to create that very bleak future.

1984 has undoubtedly been read by political power brokers the world over.  The principles of Orwell’s “newspeak” have been reverse engineered and put to work in the marketplace of ideas.  The warning been turned on its head to become almost unrecognizeable. The book’s title and the word “newspeak” have become little more than epithets used during political/religious quarrels.

Orwell, the visionary science fiction thinker and author laid out his fantasy of an oppressive, dystopian future empire, where every aspect of life is monitored and enforced by a virtually omniscient political force.  The gloomy world is mentally shaped by newspeak.  The dialect presents words with at least two meanings to obscure instead of revealing truth and meaning.  Obfuscation is the goal of newspeak.

Certainly, the twisting of language and communications for purposes of public relations and religio/political propaganda has been in use before Orwell’s day.  The philosopher, Aristotle famously used his own form of newspeak when he said, “There must be war for the sake of peace.”  American, John C. Calhoun, in 1838, said, “We see [slavery] now in its true light, and regard it as the most safe and stable basis for free institutions in the world.” Interestingly, William Shakespeare wrote in “Three Witches”, “Fair is foul and foul is fair.” 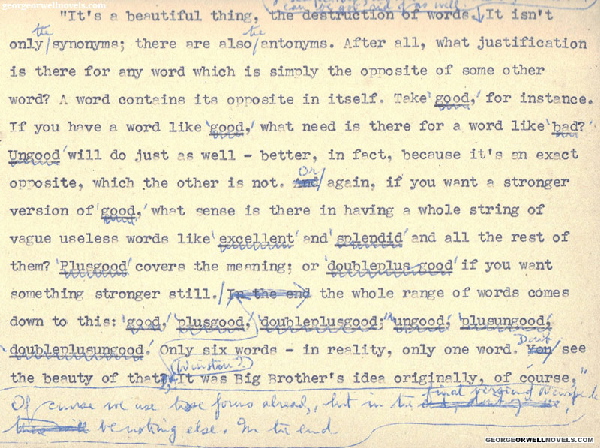 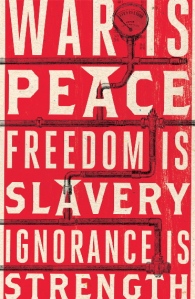 Indeed, we can find examples of this type of language today. We have the Department of Defense.  There are Peacekeeper missles and peacekeeping missions.  Ironically, in 1983, Alexander Haig paraphrased Winston Churchill when he stated on television, “That’s not a lie, it’s a terminological inexactitude.” How about the dreadfully innocuous phrase, “collateral damage” to substitute for human suffering and death?

Newspeak is also supplemented with professional jargon and managementspeak.  Who hasn’t been baffled by such terms as “Consultations”, “learning outcomes”, “going forward”, “life goals” or “profit outcomes”.

In our personal lives, instead of depression, we have bipolar disorder.  How about “happiness deficit”? Normally active, curious children now “suffer” from Attention Deficit Hyperactivity Disorder”.

Shoppers are the perennial targets of newspeak.  In a tourist brochure for the state of Vermont a page featured several photos of shopping malls.  The description? “The Best Hiking in Vermont”.

In a world that is bombarded with newspeak from each and every quarter, I’m sure you can remember other amusing and not so amusing examples of newspeak, too.

The Blue Jay of Happiness has a very common contemporary example of newspeak: “Not necessarily unconstitutional”. Does it mean, “not illegal but certainly wrong?”

An eclectic guy who likes to observe the world around him and comment about those observations.
View all posts by swabby429 →
This entry was posted in Controversy, cultural highlights, History, Politics, religion and tagged 1984, George Orwell, newspeak, propaganda. Bookmark the permalink.