Vases have been constructed for thousands of years. They’ve been formed from various materials throughout history. Those two facts have interested me for years. The art of constructing vases is connected with our species’ primal love of flowers.

Flowers and humans have lived and evolved together since prehistory. Evidence of flowers, purposely gathered and bunched together have been found at burial sites of neolithic peoples. Potters and craftsmen in the most ancient civilizations enjoyed great esteem if they excelled in producing pleasing, artistic vases and urns. Evidence of this has been 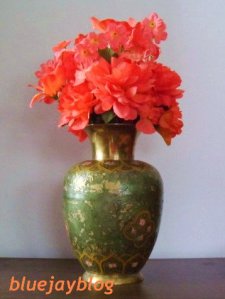 found at archaological sites from ancient China, to Sumer, and Pharaonic Egypt. The practice continues to this day.

All of the major civilized societies have brought flowers into their temples and living quarters. To keep the cuttings fresh, they needed containers. To enhance the flowers, the artisans produced attractive containers. Many of them were formed from metals. This vintage Indian brass vase was made using skills and techniques that have been passed down from generation to generation in South Asia. A simple cluster of flowers in a contemplative color is all that is needed to produce a balanced, pleasant vision. 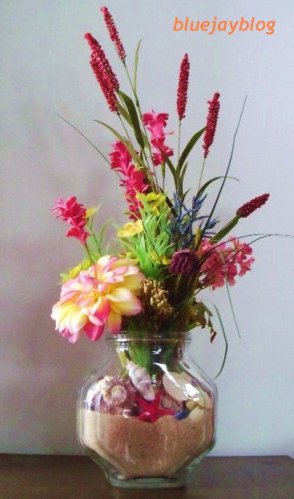 Sparkling clear glass or crystal vases have long been used in traditional forms of flower display. This mid 20th Century octogonal vase presented a few challenges that were fun to solve. I decided to half-fill the vase with souvenir sand from Los Angeles’ Malibu Beach. I never know when I’ll feel nostalgic for the beach here in Nebraska. I picked out some fun sea shells and a small sea star to place into the sand.  Finally, some seaside type flowers were arranged as a topper for terrarium style vase work. 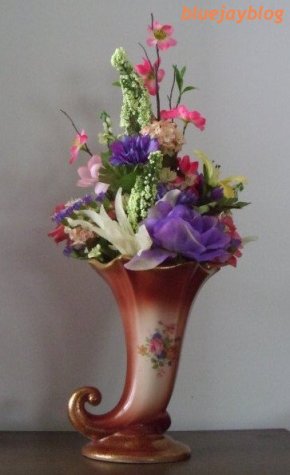 A porcelain, neo-Victorian cornucopia is just the container to use for a more formal look. This style was especially popular during the late 1940s. This style is ornamental, yet simple. When decorated with an applique’ and a touch of paint, it becomes elegant. A posey of tea roses would look nice in this, but I decided to go with a cornucopia of colors instead. The semi-formal arrangement was a good finale’ for the day’s floral session.

The Blue Jay of Happiness hopes you can discover containers made of these and many other materials. Enjoy!

An eclectic guy who likes to observe the world around him and comment about those observations.
View all posts by swabby429 →
This entry was posted in Floral Arts, History, Hobbies, Vintage Collectables and tagged antiquities, artifacts, vases. Bookmark the permalink.