Non-Harming Is The Root

Somebody got their wires crossed when notifying the public about Spirit Day this year.  I only found out about it after the fact, when Jorge mentioned the event while we were chatting yesterday. He told me how proud he felt about how his niece, Clarinda, wore a purple warmup suit all day on the 17th and explained to her classmates why she was wearing it.

Spirit Day is when much of the general public and most of the LGBT community take a stand against bullying and show support for lesbian, gay, bisexual, and transgender youth. It’s an annual event for schools, organizations, public figures, and especially individuals to wear some item of purple to show their support.  Why purple?  On the rainbow flag, the purple stripe symbolizes spirit. 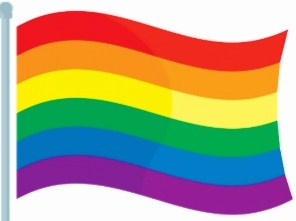 Jorge said Spirit Day means a lot to him, personally.  He wishes there had been such a day during his youth. I told him that I strongly agree with him on that point.  Jorge said that the simple act of wearing purple wasn’t the point, because the rainbow flag didn’t even exist when we were kids.

The main points of not harming LGBT kids and showing wise, compassionate understanding and support were almost entirely absent from the public and familial relationships with gay kids.  There were few or no safe places for gay kids to take refuge from bullying classmates and teachers. Very few parents had any desire to understand the nature of their gay children.  The subject was neglected and denied. At the most harmful level, it was believed that gay kids needed to be fixed.  The gay kids suffered deeply by having to lie about their true nature in order to avoid harm from others. These attitudes have not gone away.

Jorge grew up in Monterrey, Mexico. His neighborhood and schools were steeped in an almost stereotypical machismo. From his earliest school days, he was subjected to insults from his peers and parents. Threats of physical violence from bullies were a daily presence to my friend when he was a boy. The only moral support Jorge could count on was a compassionate teacher at his grade school.  It was the kindness of that one understanding man who enabled Jorge to grow up with one place of refuge.  Without that selfless kindness, my friend may have taken his own life. At the very least, we simply stuff ourselves more deeply into the closet.

The mental and physical abuse of LGBT and other minorities are why many of us understand that we are drawn towards cultivating a non-harming attitude towards ourselves and especially towards others. This attitude sometimes becomes the bedrock foundation of our personal philosophies.

I touched upon Ahimsa the other day in this blog. http://tinyurl.com/ls4jjfe However, there is much more to non-harming than a mundane political talking point that we adopt temporarily for a convenient argument’s sake. It is sometimes deeply imbedded and practiced from our deepest core.

Non-harming is the manifestation of good conduct, good thoughts, and good words. We call these things love, compassion, empathy, and kindness. The highest examples of non-harming show themselves as selflessness, generosity, and sincere delight in the joy and happiness of other people.

The flip side of non-harming is harming, or bad conduct. Harm embraces all thoughts, words, and physical actions that cause harm to oneself and to other people. Some common manifestations of bad conduct are well known. They include thoughts, words, and actions rooted in hatred, righteousness, envy, jealousy, moral indignation, and anger. Speaking, writing, and physical harm against other living beings and people in any coarse or subtle manner do not contribute to personal nor social well-being. However, good ethical conduct and an overall philosophy of non-harming goes beyond simply refraining from hurting yourself and others. It doesn’t have to merely act as a sort of mental brake against our inner urges that enables us to feel superior to others.  Non-harming is a happy, joyful end in itself.  We can find ourselves more centered in the world of all living things and people rather than withdrawing and retreating from the world.

Non-harming of all sentient beings, animal and human, fertilizes the positive attributes of enthusiasm, patience, tranquility, meditation, generosity, and the deepest love. The best way to activate these qualities is through practice and not mere mental activity and wishful attitudes or thinking. Loving, generous thoughts, speech, and conduct towards those we love, and those with whom we don’t agree nor understand, bring about the most satisfying results.

The Blue Jay of Happiness enjoys studying about how people have learned to unite wisdom and compassion in order to improve one’s life.

An eclectic guy who likes to observe the world around him and comment about those observations.
View all posts by swabby429 →
This entry was posted in Contemplation, Controversy, cultural highlights, Friendship, Health, Meanderings, Politics, religion, Science, Youth and tagged Buddhism, compassion, empathy, friendship, homophobia, LGBT youth, non-harming, Spirit Day. Bookmark the permalink.