On the spur of the moment, I picked up the Tarot deck that I’d left on a stack of books after Jorge’s New Year’s visit. I closed my eyes and shuffled it three times then cut the deck once.  I dealt out three cards.  The first (past) was 2 of Cups reversed. The third (future) was 9 of Swords, and the second (present) was The Hermit. Even to my skeptical mind, the draw was quite an accurate picture. The reversed Cups card corresponded to some misunderstandings with my lover. The Swords merged with some difficult decisions looming in the future.  The Hermit was spot on for my present state of mind.  While I don’t believe there is any supernatural force at work with my Tarot decks, there is some connection going on between the cards and my subconscious thinking processes.

A couple of days earlier, because of a break in the frigid Nebraska Winter weather, I decided to take a walk on the “Cowboy Trail” west of Norfolk. Even though the air had warmed up a bit, there were no other hikers on the path.

I watched the slabs of ice float past me on the river.  A thicket of trees and bushes still sported an accent of pure, white snow within the shade.  A squirrel chased his possible mate up one tree then down another, they scampered away into the underbrush away from my view.  A screeching hawk glided over the south bank of the river. I felt like I could walk all afternoon.  Once again, I felt at one with the World.

About 15 minutes into the walk, I stopped to contemplate the river view.  I thought the scene looked like one of those Japanese line drawings.  My mind drifted away from the present moment.  I thought about some of the books I’ve read by Alan Watts.  I vowed to re-read one of them. Watts’ words always hit a chord with me. I jotted a note to myself then shoved it into my jeans pocket.  It was time to resume the walk and allow my thoughts to simmer down.

This was what it was like to be alone that day.  The air felt crisp but the sunshine warmed my parka comfortably.  I noticed the distant hissing of traffic on the highway to the East. A large dog barked to the North. I contemplated the parked railroad boxcars nearby.  I simply noticed these things, but didn’t form any stories nor internal chatter about them. I simply smiled inside and out, on the verge of euphoria.

It was then, that I noticed a line of dark clouds to the Northwest.  I felt my brow furrow.  I took a deep breath and decided it was time to return to my car.  Despite the looming change in the weather, I still felt the lightness of just being.  Again, a screeching hawk cruised over the opposite bank of the river.  Was it the same one I saw earlier?  The trail was otherwise silent and very peaceful. At about the time I reached my car, a strong, icy wind had also arrived.

I unlocked the door, slid onto the driver’s seat, then laughed as I slammed out the wind, safe inside the ol’ Camry.

Here in the present, I look at the Tarot card.  I remember that The Hermit represents 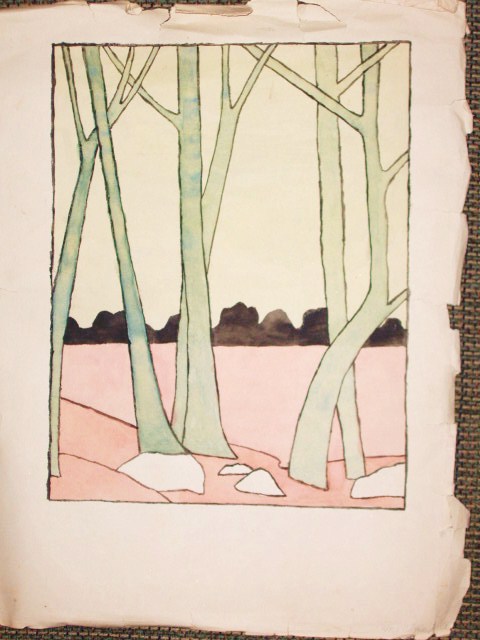 being alone with ones inner guidance. There is an emphasis on soul-searching and introspection.  There are secrets to be revealed, but they’re not arcane.  The wisdom is there for anybody earnestly seeking and willing to calm the mind in order to understand.

Winter is the time for me to draw my focus within. I have a need to remember why life is the way it is.  The gadgets and gossip are less interesting.  There is the need to meditate and then contemplate my motivations, personal values, and principles. Even though I have long questioned the status quo, I sometimes take refuge in it.  But now is the time to come back to my center, my quiet core.  It’s time to honor the silence that I rediscovered on the “Cowboy Trail”.

It was time to realize the wisdom represented by The Hermit.  Life’s coincidences are certainly amazing.

The Blue Jay of Happiness knows that complete peace and joy can come only with surrender to quiet and solitude.

An eclectic guy who likes to observe the world around him and comment about those observations.
View all posts by swabby429 →
This entry was posted in Contemplation, Environment, Health, Meanderings and tagged meditation, seclusion, solitude, tarot, wonder. Bookmark the permalink.