Take A Walk In The Park Day

The Summer had been unusually hot and dry for the Southwest coast of British Columbia.  For the past week and a half, I’d been hitting all the tourist spots of Vancouver and much of the outlying area.  I had three more days until I had to return to my sleepy Nebraska town.

After breakfast, I decided to leave the rental car at the hotel for awhile and just walk.  By chance, I found my way to Beach Avenue and decided to stroll to the Northwest to find out where the road ended up, or until I got tired.  The street eventually ended up at Stanley Park.  There was forest-land to the right and the English Bay to the left.  The early morning was already getting warmer, but I felt fresh and ready to explore this oasis within the city.

Several speedwalkers and inline skaters passed me on the wide, paved pathway.  A young mother, sitting on a bench, scolded her twin toddlers, while a seaplane came in for a watery landing in the Bay.  I decided to keep a slow pace in order to take in this varied, surprising environment and to do some people watching.  I noticed that I was sporting a wide grin.

It was perhaps an hour later, when two young French speaking boys stopped me on the walkway.  They jumped around pointing at some shrubbery.  One of the boys grabbed my hand and said I must talk to their father.  Of course, this was not only surprising, but somewhat unnerving.  Moments later, I was taken to a father and mother picking blackberries from a very large bush.  The father introduced himself and his family then invited me to pick some berries to enjoy as a snack.  Maybe half an hour later, we had finished our little chat and blackberry feast.  I continued my stroll, now with purple stains on my lips and fingers.

The walk-around lasted until early afternoon. Then heading back to my hotel room, I made plans to explore the interior of Stanley Park the next day.

About one year before my Vancouver vacation, my ex invited me to visit his new apartment in Broken Bow, Nebraska.  The town is very close to the geographical center of the State.  After hashing through some unfinished personal issues, we decided to “cool down” by driving a few miles south to the village of Callaway.  The walk-around and exploration of the little town was relaxing and educational.  I discovered that the county seat used to be located in Callaway before it was situated in Broken Bow. The walk in Callaway’s Morgan park had given us time to gather much needed emotional energy. 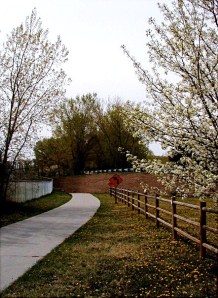 Whenever I need to get away from the usual hum-drum day to day routines, one of my favorite places is close to my home.  Ta-Ha-Zouka park is just south of Norfolk, Nebraska.  I usually park my car near the trail-head of the Cowboy Trail. From there, I walk west for at least an hour.  The paved path is almost always nearly deserted.  There’s a blend of cultivated and wild landscape along the way.  After the hour is up,  I head back to the East and take in more trees, flowers, and small animals.  I don’t care if the weather is warm or icy cold.  This walk is the best part of the day.

There are thousands of parks in the World.  Some are tiny, and some cover many square miles.  Maybe there’s one near you.  I hope you take some time to enjoy Take A Walk In The Park Day, there.

The Blue Jay of Happiness notes that a walk in the park can cost you nothing at all, but can give you priceless benefits.

3 Responses to Take A Walk In The Park Day