Dad used to tell me that it was too bad that I came of age at a time that Packards were no longer built.  He remembers when the owning a Packard meant that you

were an elite member of the social aristocracy.  Packard was the embodiment of the peak of American Automotive luxury and quality.  In dad’s eyes, Packards were the best cars ever produced.

The legendary automobile company had it start in Warren, Ohio by the brothers who operated the Packard Electric Company.  James and William manufactured electrical equipment and wire for industry.  The most popular story has it that James was so unhappy with his purchase of a Winton automobile that he personally complained to maker Alexander Winton.  The car maker responded to James Packard by saying, “If you’re so smart, build a better machine, yourself.”  So, in 1899, James did.

The first Packard was a one-cylinder buggy that huffed around Warren, Ohio.  People noticed that the car was very reliable and wanted one for themselves.  Before they knew it, the Packard brothers were in the car business.

After a few years, in 1904, the new company earned its stripes with the production of a four-cylinder, aluminum bodied speedster, the “Gray Wolf”.  It was the first American racing car sold to the general public. comedian Jack Benny with his Packard

By around 1914, the Packard Automobile Company soon established itself in Detroit, Michigan and had become one of America’s prestige car builders.  Wealthy industrialists and national leaders boasted their ownership of Packard cars.  In 1915, Packard introduced their powerful “Twin Six” V-12 engine.  The Packard engines and chassis sported the custom coachwork from the firm of LeBaron, Roliston & Dietrich.  These cars were the absolute pinnacle of power, style, and luxury.  The Packard V-12 and Super V-8 models were peerless.

As the first World War dawned, Packard was one of the very first companies to convert to war production.  War historians claim that the most important single product of the war industry was the “Liberty” aircraft engine, an adaptation of the V-12 auto engine. After the war, Packards returned to consumer production with large, squared bodies that represented the finest elegance, solidity, and prestige.  However, in the 1930s, the Packard Company had been in the sights of the much larger General Motors Corporation.  A new Cadillac was built with a V-16 engine.  This new GM car edged past Packard as the best selling luxury car in America.

Packard retaliated by introducing a more affordable, smaller model, called the “One Twenty”.  The new car was more approachable in the economic climate of the Great Depression. The smaller Packards set new sales records and enabled Packard to survive as the only independent luxury car maker past the dirty thirties.

The second World War saw the halting of all consumer automobile manufacture in the US.  Then, unfortunately for the company, Packard stopped building uber-luxury cars after the war.  Executives decided to focus on mid-priced cars.  Though successful at first, the new image was disasterous for the Packard Company. Their reputation as the premier prestige, luxury car maker had vanished. Sales were hurt further by the absence of a V-8 engine. 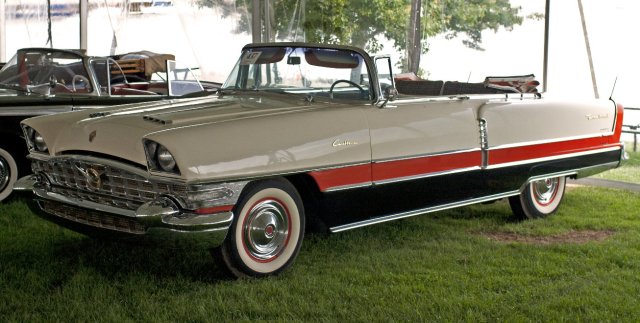 Faced with fierce competition from GM, Ford, and Chrysler, Packard sought to team up with another maker.  In 1954, Packard purchased the debt-ridden Studebaker. The plan was for the new Studebaker-Packard corporation to stabilize their balance sheets and eventually join the American Motors Corporation that had been formed from the merger of Hudson Motor Car Company with Nash-Kelvinator  Corporation.

The death of the American Motors president halted that idea.  The new AMC President, George W. Romney, was opposed to any merger with Studebaker-Packard.  In hindsight, auto industry historians believe that if the merger had actually taken place, the enlarged AMC would have overtaken Chrysler Corporation as the number three automaker. the last of the marque

One result of the merger failure was that Studebaker-Packard needed to downsize.  Then president, James Nance and stockholders decided to suspend the Packard manufacturing operations in Detroit.  The last model adjustment was a completely restyled top of the line Packard Patrician for 1955-56.  The last of the “true” Detroit Packards were given new sheetmetal sculpturing, headlight framing “cathedral” taillights, and a new grill.

The very last “true” Packard produced, was a black Packard Patrician sedan that was driven off of the assembly line on June 25, 1956.

Thereafter Packards would be built as upscale Studebakers in South Bend, Indiana.  The post-1956 Studebaker-based Packards were derisivily called “Studepackards” by comedians.  The last of the faux Packards were continued until 1958.  Oddly enough, Packard enjoyed the highest profit margin per car, in history, the year the company went out of business.

The Blue Jay of Happiness notes that the late 1940s Packard Clipper model featured an alarmed fuel tank that whistled as gasoline was pumped into the car.  The whistling stopped when the tank was full.

2 Responses to The Last “True” Packard