I emptied my pockets after returning from a road trip yesterday and sorted my change.  That’s when I noticed that someone had given me a small dollar coin instead of a quarter.  Upon closer examination, I noticed that it was a 1999 Susan B. Anthony dollar.  I set the coin aside so that I wouldn’t mistakenly spend it as a 25-cent piece.

I wondered at the lack of perception at the United States Treasury Department in that they kept making mistakes about dollar coin sizes.  The treasury had a previous ill-experience with another coin that was similar in size to the quarter. 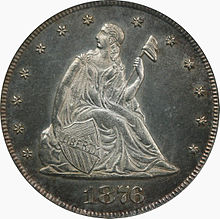 In fact, the second least liked coin in American numismatic history is the hugely maligned 1875 twenty-cent coin.  This example was also greatly confused with quarters.  At the time, the obverse (heads side) of the twenty-center and the 25-center were nearly identical.  A first year of issue yielded about a million of the twenty-centers but there was little demand.  Three years later, the denomination was abolished and much of the total number was melted down by the Treasury Department.

Meantime, a dollar coin had not been issued since 1965, the demise of the standard

silver dollar. The next attempt at a dollar-piece was the Eisenhower Dollar, designed in 1971.  The general public shunned the coins because they were too large and bulky.  The only place the Eisenhower Dollar had some modicum of popularity was in the case of Nevada casinos where they displaced privately manufactued gaming tokens.  The last year for the Ike dollars was 1978.

President Jimmy Carter signed the Susan B. Anthony Dollar Coin Act into law in October of 1978.  The obverse was to feature a profile portrait of women’s rights activist Susan B. Anthony.  The image was the first historical female figure to appear on American money.

Chief Engraver for the US Mint, Frank Gasparro envisioned the design based on a

photograph from a women’s suffrage history book.  The all caps word LIBERTY arches above Anthony’s likeness. The date of issue is below the portrait, the “In God We Trust” motto is to the right.  13 stars fill out the rest of the design.

The reverse of the coin carries over the previous Ike Dollar reverse, shrunken to the smaller format. That design was inspired by the Apollo Eleven Moon mission insignia featuring an eagle with an olive branch in its talons hovering over the surface of the Moon.

To differentiate the coin from quarters, the original shape of the Susan B. Anthony Dollar was to be eleven sided or a hendecagon. Vending machine manufacturers lobbied against the hendecagon shape with the claim that vending machine technology would need to be reconfigured to accept a non-circular coin.

The Treasury Department caved into the wishes of the industry.  The coin design was rounded out. The vestigal hendecagon is seen as the inner portion of the coin’s rim. Unfortunately, the coin’s size was not increased to compensate for similarity to a quarter. Compounding the potential for confusion was that the edge of the new dollar coin had the same ridged edge as a quarter.

The Susan B. Anthony Dollar was inaugurated on July 2, 1979.  The release was coordinated with that of a one dollar postage stamp. Public reaction was almost immediately negative.  Predictably, the major complaint was confusion over the size and shape of the coin.

Other complaints came from political factions who espoused thinly veiled misogynistic views.  Anthony was a controversial feminist, so her image was highly unpopular with those who opposed the women’s rights movement of the 1970s and 1980s.   Other people objected because contemporary US coinage depicts former Presidents on the obverse; Anthony was not a former President.

As the 1980s and 90s progressed, more vending machines accepted higher denomination money. Some machines were manufactured with the capability to return change as dollar coins.  By 1998, the US stock of dollar coinage was very low.  While a new design for dollar coins had been approved for the year 2000, the US Mint was not authorized to issue the new Sacagawea Dollar until then.  The Treasury had to take the Susan B. Anthony Dollar out of retirement.  The Anthony Dollar was restruck in 1999 to fulfill commercial demand. The final run of Susan B. Anthony Dollars amounted to 41,368,000 coins.

In case you’re wondering, the 2000 and newer Sacagawea Dollars have the same metallurgical “signature” as the older Susan B. Anthony Dollars.  The two types of coins work identically in vending machines.

The Blue Jay of Happiness notes that most of us had no idea that an eleven sided geometrical shape was called an hendecagon until today.

An eclectic guy who likes to observe the world around him and comment about those observations.
View all posts by swabby429 →
This entry was posted in cultural highlights, History, Hobbies, Politics, Vintage Collectables and tagged coinage, currency, dollar coins, numismatism, Susan B. Anthony, US Department of the Treasury, US Mint, women's suffrage. Bookmark the permalink.