If he could know what is happening in Alberta due to resource exploitation, Grey Owl would be spinning in his grave. The man was devoted to preserving the wilderness lands of Canada.  His stated goal was to arouse a sense of responsibility that Canadians should have for the lands of Canada along with its human and animal inhabitants.

Grey Owl believed that Canada’s special and unique identity depended upon conservation and preservation of the wilderness was vital to national well-being and identity. The wilderness of Canada makes the nation a highly important place on Earth. 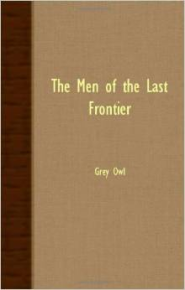 I first learned about Grey Owl by reading his first book The Men Of The Last Frontier. My paternal grandfather offered to loan the book to me because he knew I’d find some value in it.

Grey Owl described his life among the Indians, living many miles away from other people. He survived with those who hunted, trapped, fished, and canoed across the wilds of unsettled Canada. The collection of stories shared around campfires describe a uniquely Canadian lifestyle that has nearly vanished. The book gave me a feeling of aching
nostalgia for a place I could only see in my imagination. His writing stirred up the latent environmentalist in this reader.

Grey Owl has been described as a “strange bird”. A white man who self- 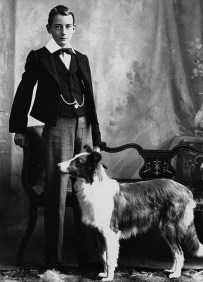 identified as a native American. He was born in 1888 at Hastings, England as Archibald Belaney. He was parented by two aunts after his father left him off to pursue his interests in the United States to practice taxidermy and try to grow oranges in Florida. Archie knew very little about his American mother, so this triggered his imagination to think
about the mysterious lands of North America. He began to think
of himself as half-Indian. In his fantasies, Archie’s father
was a Scotsman who had fought battles in Mexico, his mother
was an Indian who gave birth to him at a Mexican ranchero.

As a boy, young Archie was captivated with all aspects of the Native North American peoples. He enjoyed sketching pictures in his notebooks of people dressed as Indians, wearing feathered headdresses. The boy played the “Red Indian” role with his friends during play-time. Later, he taught himself bird calls and woodcrafts. He also enjoyed sleeping in the outdoors.

To escape from the mundane life of his stuffy aunts in Hastings, he immigrated to Canada. His goal was not the English-flavored cities and towns but the wilds of pristine Canada. In his new country, Belaney began to openly claim that he was a half-breed from Mexico.

He first settled on Bear Island in Ontario and befriended the Objibwa people. There, he learned how to survive the harsh Winters. He honed his skills on how to track animals, canoe, and use snowshoes. Belaney immersed himself in Ojibwa rituals and myths. In 1910, he married his first wife, an Ojibwa woman. At the outbreak of the First World War, Belaney left his wife to enlist in the British Army. After the war, he
returned to his beloved Canada.

Belaney invented his new life completely out of fantasy. The only place his beginnings took place was in his head. Belaney claimed that he was adopted into Native Canada during a fantastic ancient ritual. It was at that time he supposedly received the name, Washaquonasin or Grey Owl. Soon he began dying his brown hair black and toned his skin with henna.

By the time he reached his 40s, Grey Owl had become worried about an increasing loss of wilderness territory and more intrusion of white culture. He watched as trappers arrived and exploited his beloved beavers. Loggers next arrived and cut down the trees. Because only dry brush remained, fires were the result.

It was with his new Mohawk wife, Gertrude Bernard, that his love of wildlife came to fruition. Bernard adopted a pair of beaver kits whose mother had been killed in a trap. Grey Owl became emotionally attached to the two creatures and swore to never again trap another beaver.

As he advocated his vision, Grey Owl began his writing career.  His books became very popular and he was one of the better known writers of his time. Because of his fame, the Canadian government gave Grey Owl a home in the newly established Prince Albert National Park in Saskatchewan. It was there, that he was able to concentrate on his projects to an even greater degree.

During the historical period that most whites started believing that cities were superior to the wilderness, Grey Owl advocated for equality of the two. He came to envision a Canada that was based on equality and unity of all its places and peoples.

Sadly, Belaney also lived with alcoholism. He often was seen drunk in public. His addiction caused conflict between himself and the Parks officials in Ottawa. Eventually, the years of touring and drinking tore down his health. In April of 1938, he was found unconscious in his cabin. He was brought to Prince Albert hospital where he died of pneumonia, April 13th. His gravesite is located near his old cabin.

Before his death, Grey Owl’s true identity had become known publicly. In response, publication of his books was halted and controversy about his usefulness to the public discourse was questioned. At long last, in the 1970s Grey Owl was recognized as one of the foremost conservationists. His work and name has kept the important aims of wildlife preservation in the conscience of the public then and now.

The Blue Jay of Happiness ponders this phrase by Grey Owl:  “While scholars are comparing and contrasting theories, debating intellectual questions, and dividing humankind into categories, the world is changed by persons with faith, spirit, emotion, compassion, intuition, and irrational thinking.”

An eclectic guy who likes to observe the world around him and comment about those observations.
View all posts by swabby429 →
This entry was posted in Books, Controversy, cultural highlights, Environment, History, Politics, Wildlife and tagged Archibald Belaney, Canada, conservationism, Grey Owl, Hastings England, Saskatchewan. Bookmark the permalink.