I stumbled across an historically questionable movie on the Web late this past summer featuring Pretty Boy Floyd. The movie, “Public

Enemies” piqued my interest in unsavory characters. As far as notorious criminals go, Pretty Boy Floyd was one of the most unsettling gangsters.

Charles Arthur Floyd was born on February 3, 1904 at Adairsville, Georgia. When he was seven-years-old, the family moved to Oklahoma. During his formative years, Floyd spent time in Arkansas, Kansas, and Missouri. His life of crime officially began at the age of 18, after he took $3.50 in coins from a post office. In 1921, Floyd married Ruby Hargrove. Their son, Jack was born while Floyd was serving time for robbing a Kroger store in St. Louis, Missouri. Floyd served three and a half years of his sentence and was released on parole. Ruby divorced Floyd during his imprisonment.

After release, Floyd joined forces with other notorious Kansas City criminal figures and helped commit a series of bank robberies. It was around this time that Floyd acquired his hated nickname. One of the witnesses to a robbery described the three robbers to police. He called Floyd, “a mere boy–a pretty boy with apple cheeks”.

Starting in 1929, Floyd was wanted for a series of various crimes. He was arrested in the investigation of a the murder of an Akron, Ohio policeman who was killed during a robbery.  The next year, Floyd was convicted and sentenced for the robbery of the Sylvania, Ohio Bank. He managed to escape.

Although Pretty Boy Floyd was a violent criminal, he did enjoy public popularity during the Great Depression. During some of his bank robberies, he managed to destroy as many mortgage documents as possible. Oklahomans vouched for his safety and dubbed him the “Robin Hood of the Cookson Hills”.

Police suspected Floyd in the deaths of two Kansas City bootleggers in March of 1931. The next month, his gang killed a patrolman in Ohio. In July, Floyd murdered ATF agent Curtis Burke of Kansas City. The next year, a former sheriff of McIntosh County, Oklahoma, Erv Kelley, was killed when he attempted to arrest Floyd.

There is some dispute among various historians whether or not Pretty Boy Floyd was actually involved in an incident called the “Kansas City Massacre”. The FBI alleges that Vernon Miller, Adam Richetti, and 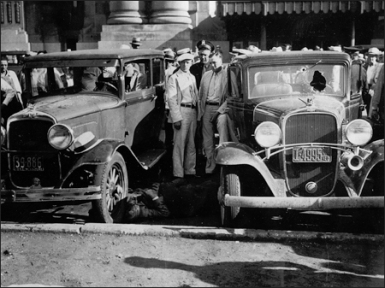 Floyd attempted to break their fellow robber, Frank Nash, out of the Leavenworth, Kansas Penitentiary.

In the morning of June 17, 1933, police escorting Nash, at the Union Station in Kansas City, were ambushed by gunmen. Two Kansas City policemen, a patrolman, and a detective were killed. McAlester, Oklahoma Police Chief Otto Reed and FBI Special Agent Ray Caffrey also died in a car. During the crossfire, Frank Nash was also killed.

Positive identities of the killers were not officially confirmed. Many

archivists believe that another gang member, who resembled Floyd, Sol Weismann was a perpetrator. On June 30th, Kansas City police were sent a postcard from Springfield, Missouri from Floyd. It read, “Dear Sirs, I, Charles Floyd, want it made known that I did not participate in the massacre of officers at Kansas City. Charles Floyd.”  The detectives were convinced the note was truthful and genuine.

A string of close calls with the law came to an end, October 22, 1934. Floyd hitched a ride near an East Liverpool, Ohio pool hall. the FBI account says that Floyd was spotted by officers, at which point, he left the car, and ran towards a treeline. FBI agents, at the time, denied any involvement by local police. However, official Clarkson, Ohio police records state that after Floyd regained his stability, the perpetrator began running again. At that time, FBI and police opened fire on the suspect, taking him down. Pretty Boy Floyd died within 15-minutes after falling to the ground.

The bank robber’s body was prepared for viewing at an East Liverpool, Ohio funeral home, then shipped to Sallisaw, Oklahoma. The funeral was attended by an estimated 40,000 people. To date, Pretty Boy Floyd’s funeral remains the single largest in Oklahoma history.

Floyd was finished and soon out of the limelight. That is until 1979, when a retired East Liverpool Police Captain told his side of the story, during an interview with “Time” magazine. Captain Chester Smith was credited as shooting Floyd first. The sharpshooter aimed to wound Floyd so that the suspect could be interrogated. Smith disarmed Floyd after arriving at his side. Smith was immediately ordered away from  the scene by the FBI so they could question Floyd. Allegedly, the FBI agents were unable to obtain any information, so Floyd was shot to death at point-blank range by a sub-machine gun.  That account was officially disputed by FBI agent Winfred Hopton in a letter to the editor as a follow-up to the magazine article.

Pretty Boy Floyd remains a legend in popular culture. He has been mentioned in music, literature, film and depicted in at least one video game.

The Blue Jay of Happiness notes that Floyd was eulogized by Woody Guthry in the song, “Ballad of Pretty Boy Floyd”, and by John Steinbeck in the novel The Grapes of Wrath.

An eclectic guy who likes to observe the world around him and comment about those observations.
View all posts by swabby429 →
This entry was posted in cultural highlights, Entertainment, History and tagged bank robbery, Charles Arthur "Pretty Boy" Floyd, FBI, Great Depression, Kansas City Massacre, organized crime. Bookmark the permalink.