No, my use of “dry mix” in the title has nothing to do with cat food. I’m using the term in regards to the ingredients of today’s floral arrangements. They are more or less “mixed media”. 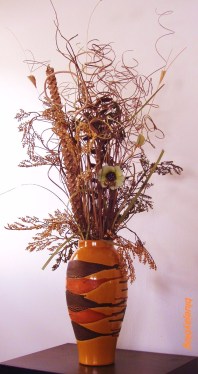 I have a large supply of dried stems and grasses on hand because I like to fill tall vases with them for accents. This time, I decided to take that enjoyment another step further.  There are other ways to make dry media work for you. So, I rounded up three large vintage Haeger vases as bases for the projects.

A tall “Earth Wrap” vase with a butterscotch toned overglaze is one I reserve for Autumn. I wanted to reflect the abstract decoration of the pot in the arrangement. This one has a blend of four different grasses, plastic branches, and paper.  It has a light-hearted disorder that disguises its planned symmetry. 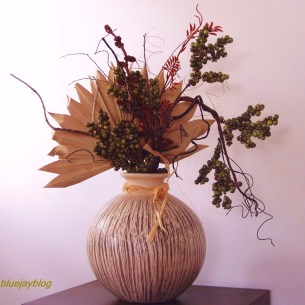 The globe shaped floor vase calls out for a contemplative design. I used a large palmetto leaf as the template for the shape I wanted. A curved branch with Styrofoam berries is the main star. Twisted elm twigs 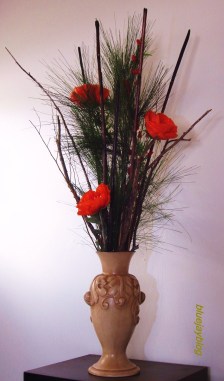 The third one took some special planning because I wanted to bring out a post-modern effect in the very large arrangement. The framework is made of two small elm branches and some bamboo stems. A Scotch pine branch fills up much of the empty space. The three large orange flowers are vintage plastic poppies. I added a stem of red faux pussy willow to finish the look.

In the end, I learned something about three dimensional mixed media. I also found out that I like its effect and utility.  I’ll be using more of this technique in the future.

The Blue Jay of Happiness says ideas are visualized in the mind and can manifest from the materials at hand.

An eclectic guy who likes to observe the world around him and comment about those observations.
View all posts by swabby429 →
This entry was posted in art, Floral Arts, Hobbies, Vintage Collectables and tagged dried plants, Haeger Potteries, plastic flowers. Bookmark the permalink.