According to the Mahayana Buddhist scriptures, the Lord Buddha always granted a request if it was asked of him three times.  In the Buddha’s end times he had mentioned to his close attendant, Ananda, that a Buddha has the ability to remain alive for an aeon.  Unfortunately, Ananda failed to understand the significance of the statement and failed to request the Buddha to remain.   When Ananda finally realized his mistake, he begged the Buddha to stay longer, but was refused.

According to traditional stories, the next day, the Lord Buddha was offered a meal from Chunda, a very pious metal worker.  The Lord accepted the offering, but instructed that nobody else should eat it because the food was contaminated.  Chunda felt great remorse and guilt when he learned that the gift of food would likely lead to the Buddha’s death.  The Lord comforted him by proclaiming that the person who offers the Buddha’s last meal will earn great merit.  That merit will be equal to that made to the Buddha right before his attainment of Parinirvana.

We might wonder why the Lord Buddha would eat the meal of truffles, underground mushrooms dug up by swine, if he knew that the food was spoiled.  He knew the meal was contaminated because of his instruction that nobody else should consume it, and that the leftovers should be discarded by burying them.

The first reason the Lord Buddha accepted the meal was because he did not want to deny anybody the merit of making an offering to him. The other reason is that he was 80-years-old and was ready to show the lesson that all beings without exception are susceptible to death.  Impermanence of all things is an overriding fact for all things in the Universe. 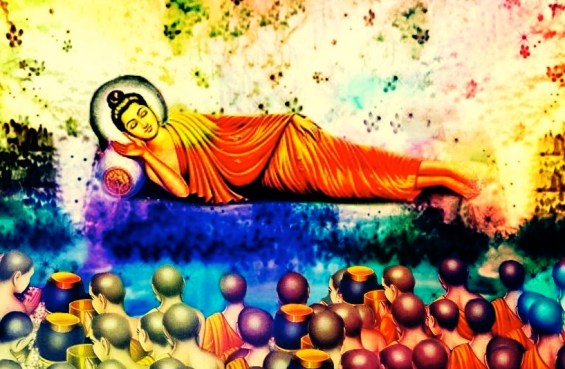 The scriptures go on to say that despite the pain from food poisoning, The Lord Buddha with his retinue of monks and followers travelled towards Kushinagar. (Kushinagar is now known as the contemporary village, Kasia, in the northern Indian state, Uttar Pradesh.) The group entered a grove of trees near the Hiranyavati River.  In an area between two very tall Sala Trees, the Lord reclined on his right side (the Lion Posture). The group of monks and followers remained respectfully silent as the Buddha taught his last words.

“Behold, O monks, this is my last advice to you.  All component things in the world are changeable. They are not lasting. Work hard to attain your own salvation. Do your very best.”

The Lord Buddha then closed his eyes and entered Maha-parinirvana. Maha means the great. Parinirvana means the final, ultimate state of everlasting peace that is only attained by an enlightened being at the very moment of physical death.

The word, Nirvana, arose from Hindu roots.  Buddhists have a somewhat different meaning for the term than Hindus, although the two remain similar. In Hinduism, Nirvana ends the cycle of Samsara–the cycle of reincarnation into numerous lives as reward and punishment.  In Buddhism, Nirvana is the ending of the circle of suffering or the state of unsatisfactory sensations in this life–also called Samsara.  Of course, 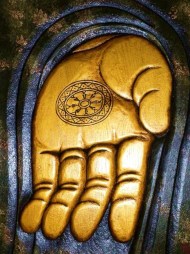 this is a very simplified definition.  There are many nuances and variations of the concept depending on which disciplines and schools an individual may follow.

Briefly, in Hindu belief, Parinirvana is the everlasting afterlife following the end of the cycle of reincarnation. In Buddhism, there has never been a definitive description of Parinirvana. Buddhist philosophy rests on the thought that Parinirvana is a state that is beyond normal human comprehension.

I must give you my disclaimer here. There are a number of events relayed in Buddhist scripture and teachings. There are also several schools and sects which follow a wide variety of beliefs. The account I wrote for you was distilled from commonly told traditional stories.  Furthermore, I am not an ordained teacher in any school of Buddhism.

Today, Parinirvana Day is a Mahayana Buddhist holiday celebrated in most Eastern Asian countries and by many Western Buddhists, today.  A few countries celebrate it on February 8th. This holiday is a celebration of devotion, meditation, songs and dances that commemorate the life of the Lord Buddha and his passing into Parinirvana. Offerings are presented by laypersons to the community of ordained monks and clergy.

Parinirvana Day is also traditionally observed as a quiet time of private meditation and contemplation by the individual about the deaths of loved ones and one’s own future death.  This is the day to think about impermanence and our place in the world and within the Universe.

I hope you have a long, compassionate life.

The Blue Jay of Happiness hopes you will also take some time to think about your own relationship to impermanence, even if you do not identify as a Buddhist.

An eclectic guy who likes to observe the world around him and comment about those observations.
View all posts by swabby429 →
This entry was posted in cultural highlights, History, religion and tagged enlightenment, Mahyana Buddhism, Nirvana, parinirvana, Shakyamuni Buddha. Bookmark the permalink.

2 Responses to The Parinirvana