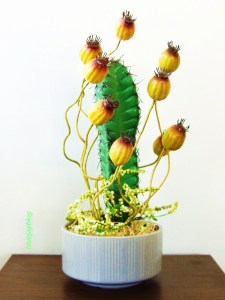 Recently, I stumbled across three vintage containers and paid ridiculously low prices for them.  As I picked up each one, on separate days, I instantly visualized what I wanted to do with them, in turn.  I noticed that, collectively, the creations are experimental flowers in old containers.

When project time arrived, I cranked up some new electronica on the old stereo and let the creative sparks fly.

The mid-century USA planter is perfect for a sci-fi inspired solitaire cactus.  The buds are on the lookout for invading Martians in flying saucers. 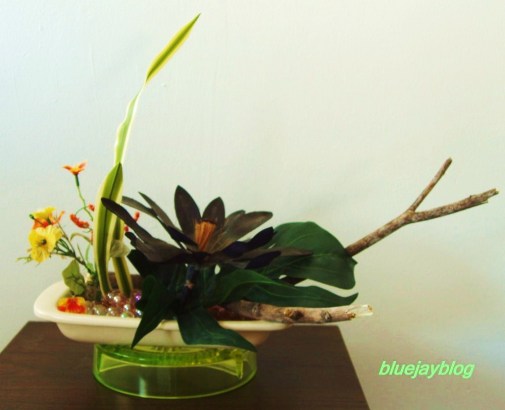 It’s new in old on older for the Ikebana.  I built up the flowers and greenery inside of the Haeger tray I’d discovered, then placed it on top of an inverted vaseline glass relish dish that I’ve enjoyed for many years. 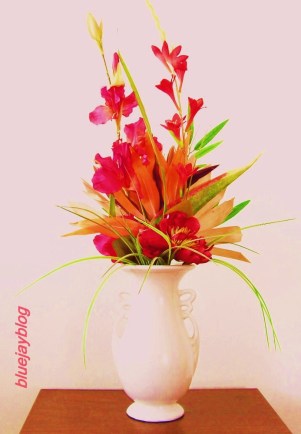 A large Bird of Paradise must share the spotlight with other flowers instead of being the star attraction. It has been trimmed short to form the base for taller blooms and edgy greenery.  It all fits inside of a 1940s vintage Abingdon two -handled vase in eggshell white glaze. As a finishing touch, I display it under the influence of daylight mixed with blacklight.

Stretch your mind today by placing new things in old containers. I started with a new idea inside my old head.

The Blue Jay of Happiness likes the expression, “Expect the unexpected.”

An eclectic guy who likes to observe the world around him and comment about those observations.
View all posts by swabby429 →
This entry was posted in art, Floral Arts, Hobbies, Vintage Collectables and tagged Abingdon Pottery, avant garde, creativity, Haeger Pottery, USA Pottery. Bookmark the permalink.