Pull Your Sofa Off The Wall Month

I spotted the name of the special observance on my events calendar and was immediately puzzled.  The phrase seemed a bit discordant and clumsy.  I wondered if its origin was British.   I don’t know anybody who has their sofa attached to a wall, I certainly don’t.  If I had gone to all the bother of bolting a couch onto a wall, I doubt if I’d want to just pull it off the wall.  I was put off a little by the name of the event. 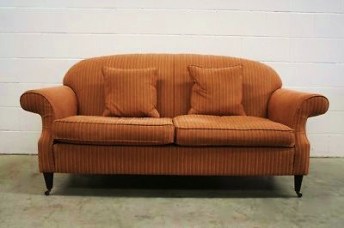 I looked up the origin of Pull Your Sofa Off The Wall Month and found out that it began as a commercial promotion for an interior decorating retail outlet in the Baltimore, Maryland area, AFP. Aha, if AFP could get people to focus on their sofa, perhaps the company might induce folks to purchase a new settee or even a whole new suite of furniture.

As observance of Pull Your Sofa Off The Wall Month moved westward, the meaning expanded into a more generalized, less expensive one.  I do wish that somebody had thought to clean up the clumsy name in the process.  The rest of the country doesn’t write nor speak the way that Marylanders write or speak, if this is a true example of their language skills.  At least we don’t pull our sofas off of our walls. The rest of humanity pulls them away from our walls or moves them away from our walls.  The operative and missing words in the Baltimore company’s instance are “away from”.

February is a good time to temporarily scoot our davenports away from our walls.  Who knows what lies in wait?  I’m guessing that more than dust-bunnies will be

discovered behind the sofas in American homes.  If you’re one of the people with a large enough room to have your sofa already parked well away from a wall, then the question becomes, what is underneath the couch?

The point of this commemoration is that it’s meant to inspire us to re-organize our living room and maybe another room or two.  Since the sofa is the largest piece of upholstered furniture in the room, that is where we’re supposed to start.

Once the sofa has found a new place, the rest of the chairs and occasional tables, cabinets, and pictures will have to fall in line, kind of like the satellite moons around Jupiter.

The more I look at my living room sofa, the more I understand why an entire month has been devoted to pulling sofas away from walls.  It’s beginning to look more like an entire redecorating project. Kudos to the AFP sales manager on this one. It will take longer than a month to figure out not only where I might re-park the sofa, but to declutter the room.  For a packrat like me, February could have turned out to be a very painful month.

I have two sofas in my dinky, little house.  One in the living room and one in my music room.  Rearranging both of them in their respective rooms seems like an impossibility. Even if I get rid of everything else in the living room, there is no other place for the sofa. I know, because I’ve used graph paper to map out my little house’s layout and placed cutout representations of furniture in various places around the rooms.  The north wall is unsuitable because that is where the front door opens into the world.  The south wall is defined by the back wall of my bedroom’s closet and notches further south to two interior entryways.  The sofa would entirly block traffic if placed against either of those walls.

If I move the sofa to the east wall, it would block the forced air heating vent.  It would also be adjacent to the front door and would inconveniently alter foot traffic.  That leaves me with its present location, against the west wall.  If I want a clever room arrangement, the sofa will have to go away.  I like the sofa, so it stays.

I have a similar conundrum in the music room, but the complications with room configuration are more complicated.  Not only that, but this sofa has sentimental value, so the music room sofa must remain against the east wall. 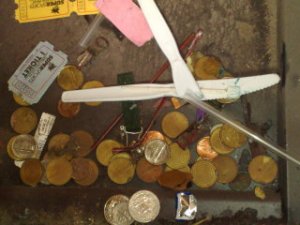 The more I look at the two sofas, and the rooms they’re in, the more I think that Pull The Sofa Off The Wall Month, should be “pull the sofas and everything else out of the house entirely month”.

I think I’ll postpone the rest of Pull The Sofa Off The Wall Month, because, if I do pull the sofas away from the walls, I might have to start rearranging my lifestyle.  The last thing I need right now is another existential crisis. The sofas are perfectly fine just the way they are and just the way they’re placed. I’ll just stick to looking for loose change beneath the cushions.

The Blue Jay of Happiness quotes the late, great Robin Williams. “We had gay burglars the other night. They broke in and rearranged the furniture.”

An eclectic guy who likes to observe the world around him and comment about those observations.
View all posts by swabby429 →
This entry was posted in cultural highlights, Meanderings and tagged AFP Interiors, furniture, interior decorating, sofas. Bookmark the permalink.

1 Response to Pull Your Sofa Off The Wall Month