Perhaps it is an urban legend, maybe not.  The invention of those reflectorized road studs seems to be the stuff of myth.  In 1933, Englishman Percy Shaw had been driving down a road in a very dense fog at night.  The haze was so thick that he nearly drove down an embankment.  Luckily, his headlights were reflected in the eyes of a cat that was perched on a nearby fence.

This close call and the encounter with the cat inspired Shaw to invent road studs.  Each stud involved encasing two glass marble-size reeflectorized beads in rubber.  He envisioned placing the studs at regular intervals between traffic lanes.  The gadget was designed to reflect headlights to help guide motorists down the road. 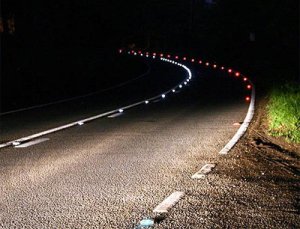 The first version of Shaw’s invention included a small depression at the site of the beads. The indentation was designed to fill with rainwater. When a car or truck drove over the stud, the beads would be pressed into the gadget and the water would be forced out. This simple action would clean the glass beads.

On March 15, 1935 Shaw founded “Reflecting Roadstuds, LTD” in Halifax, England, to manufacture the reflectorized road studs.  He named the gadget after the inspiration for his invention, Catseye®.

The World War Two blackouts and narrowed headlights proved the value of Shaw’s Catseye®. The road studs were able to still reflect the dimmer and limited lighting. 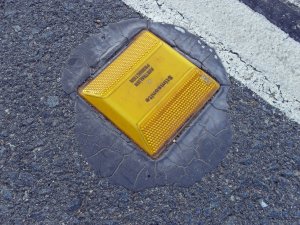 The roads bureau in the UK found them very useful.  Following the war, the Ministry of Transport mandated their use.  From there, the use of Catseye® spread worldwide.

High tech is now entering the road stud picture. Something called the “intelligent catseye” receives light from vehicle headlights in one lane. This triggers a timed output into the road studs facing the other lane to display a red color. This warns drivers not to overtake and pass.

There are also some limited experimental installations that feature solar powered LEDs in the road studs. The idea is that the studs will mark the lanes during the night.  There are still many technological barriers to overcome for areas that have many cloudy days and long night times.

The Blue Jay of Happiness says that safety is sort of like an insurance policy.  The only premium is diligence.

An eclectic guy who likes to observe the world around him and comment about those observations.
View all posts by swabby429 →
This entry was posted in cultural highlights, Gadgets, Transportation and tagged Catseyes, highway safety, Percy Shaw. Bookmark the permalink.