What About Grover Cleveland?

The political alignments in 19th Century United States were somewhat reversed from what we know today. We need to remember that, in those days, the Republican party was the liberal party, and the Democrats were the died-in-the-wool conservatives.

Stephen “Grover” Cleveland was a Democrat who today’s conservatives dubiously claim as one of their own. Grover Cleveland should be interesting to all Americans, regardless of party affiliation, because he dealt with many of the same core problems that have surfaced today.

Cleveland also has the distinction of being the only man to serve non-consecutive terms in office. He was the 22nd and 24th President.  He was the leader of the “Bourbon Democrats”, the group who supported big business interests. The Bourbons, like today’s Republicans were against “unjustifiable” tariffs, inflation and disliked civil rights. However, unlike today’s conservatives, Cleveland spoke out against imperialism, business subsidies, political corruption, and bossism.

Stephen Cleveland was born on March 18, 1837, the fifth of nine children born to Reverend Richard and Ann Cleveland of Caldwell, New Jersey. He was a distant kin of General Moses Cleveland, the namesake of Cleveland, Ohio. Young Stephen was a mischievous and frivolous boy, he also enjoyed playing sports.  He studied at Fayetteville Academy until the death of his father. Stephen was then hired as an assistant teacher at the New York Institute for the Blind in New York City for a year.

Stephen relocated to Buffalo, where he did clerical work under his uncle, Lewis Allen. There he was able to network with many influential men of New York.  Cleveland was then hired by the firm Rogers, Bowen & Rogers. It was while he was employed there, that Cleveland was admitted to the bar.

In 1862, Cleveland ran for political office for the first time. He vied for District Attorney as a Democrat, but lost to one of his companions. In 1870, Cleveland ran for Erie County Sheriff and won. In 1881 the Democratic Party nominated him for Mayor. He easily won that office. It was as mayor that he groomed his reputation for honesty.

Two years later, the Democratic Party nominated Cleveland and the Republicans nominated James Blaine for President.  Almost immediately, muckrakers fomented a scandal. Allegations appeared in the newspapers that Cleveland was the illegitimate father of an 11-year-old child. Even though there were strong doubts about the actual parentage, Cleveland admitted to supporting the child. Republicans tried to make hay of the allegation, but failed. Cleveland won the electoral vote by 219 to 182. Grover Cleveland was to begin his first presidential term.

Following his March 1885 inauguration, Cleveland set to work to fight special interests. He also reduced tariffs, and enacted other reforms. He was instrumental in enacting the Interstate Commerce Act of 1887. Otherwise, Cleveland vetoed over 300 bills.

Cleveland’s first term was also marked by his marriage, in 1886, to Frances Folsom, in a ceremony inside the White House.  This was the very first time a marriage happened in that building.

In 1888, Cleveland lost his re-election bid to Benjamin Harrison by a lopsided electoral tally of 233 to 168, despite his popular vote win. Legend has it, that Mrs. Cleveland told one of the housekeepers to keep her husband’s belongings safe until their return.

After four years of a disappointing Republican administration, Cleveland destroyed the re-election of Harrison to office. In 1892, Mrs. Cleveland’s prediction about a return to the White House came true. Grover Cleveland became the only President to win nonconsecutive terms.

His second term was to be the most tumultous one. Even though Cleveland didn’t bill himself as an activist President, he did sign some legislation to control railroad monopolies. There was also some minor legislation involving redistribution of land to Native Americans. The main focus of his presidency was to deal with the worst economic depression the nation had yet experienced. The unemployment rate was some 18-percent.

In the midst of the depression, Cleveland dealt his most controversial order.  During the Pullman Car worker’s strike in Illinois, some 150,000 railroad employees also walked off the job in sympathy.  The President ordered federal troops to Illinois to smash the strike and to arrest the leadership.  This action sharpened the divide between the business community and its workers.  Cleveland’s decision was then and now, widely criticised.

Cleveland disliked the Sherman Silver Purchasing Act that passed during the Harrison administration. He blamed the act for causing many of the country’s economic woes. Opinions in the Democratic Party about the act’s repeal were split, this caused a great deal of partisan grief for the President.

Regarding the nation’s social issues of the day, Cleveland gets a mixed review.  His inconsistent attitudes towards immigrants and racial minorities were legion. His opposition towards alcoholic prohibition won the support of East European, German, and Irish immigrants.  Cleveland also spoke out about the hardships of the Chinese workers in the West. Sadly, he sympathied with Southern attitudes about African Americans as social equals. He also waffled on women’s rights and didn’t support women’s rights to vote. 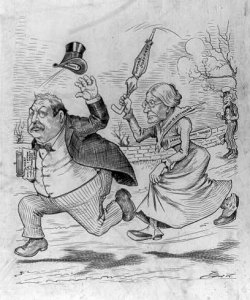 Likewise, Cleveland was inconsistent regarding manifest destiny and foreign alliances. His administration was adamantly opposed to German intervention in Samoa. He was also unhappy with corporate and planter conspiracies regarding the Hawaiian revolution.  Most of all, Cleveland claimed Britain had violated the Monroe Doctrine regarding a boundary dispute between Britain and Venezuela. He threatened war with Great Britain over the issue.

Stymied in his efforts to rescind the Sherman Silver Act and ongoing frustration with the problematic economy, Cleveland’s second term is best remembered for protecting the power of the nation’s executive branch. He broke the record for presidential vetos. This earned him the title of “guardian President”. In the end, he had no vision for the future, but was remembered as an independent, hard-working, honest President. He turned down an offer to run for another term of office and left the White House in 1897 feeling betrayed by the majority of conservatives in his party.

Following his retirement, he sometimes consulted with President Theodore Roosevelt. After 1902, he was head of the Association of Presidents of Life Insurance Companies.  Cleveland continued his political speaking and writing. In one instance, he authored an article in The Ladies Home Journal against women’s suffrage.

Cleveland became ill in the autumn of 1907. He died of a heart attack on June 24, 1908 at the age of 71. His remains were buried at the Princeton Cemetary.

The Blue Jay of Happiness notes that Grover Cleveland’s most popular nicknames were, “Big Steve” and “Uncle Jumbo”.

An eclectic guy who likes to observe the world around him and comment about those observations.
View all posts by swabby429 →
This entry was posted in Controversy, History, Politics and tagged Benjamin Harrison, Civil Rights, Grover Cleveland, political corruption, US Presidency, women's suffrage. Bookmark the permalink.

1 Response to What About Grover Cleveland?