I picked up the slim, grim appearing book out of pure curiosity a couple of weeks ago at the Goodwill Store.  At first and hurried glance, I thought it was one of those humor books that relies on irony to get laughs.  The odd translation of a William Butler Yeats

verse on the back cover convinced me of it. “Go quietly, for you are treading on my dreams.” A friend and I had a chuckle over it.

Once I settled down at home with the book, I soon discovered it was anything but humorous.  Instead, my two-dollars had gotten me a strangely elegant photographic historical biography. It’s one of those lucky, enigmatic finds that thrift shop haunters stumble across from time to time. It provides a fascinating footnote about a seldom mentioned historical period of Germany.

Self-Induced Loneliness Ludwig II is mainly an artistic book of beautiful photography.  The historical and biographical aspects are entwined with the story about the locale and scenery.  It is the real-life fairy tale tragedy of a reclusive King and his three castles and hunting lodge.

King Ludwig the Second of Bavaria is a mysterious nineteenth century figure caught between the feudal and modern European epochs.  On the one hand, he traveled from one castle to another in the world’s first electrified coach. On the other hand, he was merely a constitutional monarch, with no real political power.  What he lacked in real influence, Ludwig more than made up for  in his architectural imaginings.  He was able to turn his castles in the air, into hugely impressive monuments to a lost era.

The Introduction, written by Christina Haberlik eloquently summarizes the life of the “Swan-King”, “Fairy-Tale King”, “Mad King”.  Ludwig was born August 25, 1845 at Nymphenburg Palace, the heir to the Wittelsbach family. His parents were Marie von Pruessen (Marie of Prussia) and Maximillian II, the first constitutional monarch of Bavaria. The parents showed little, if any, interest in Ludwig nor the young brother, Otto. 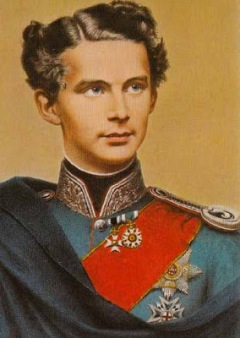 The young Ludwig was fascinated by the Midiaeval period and related to the color, blue. He was captivated by Lohengrin’s “Ring of the Nibelungs”. Peacocks and swans were his favorite birds. Swans were especially favored because of their mythical representations in classical literature and culture.

Maximillian II died when Ludwig was only 18-years-old. The youth had not yet finished developing his personality nor his formal education.  Ludwig ascended the throne on March 10, 1864. At first, his subjects were enamored by the slender, handsome new king. He was initially enthusiastic about his new title even though he was also overwhelmed by it.

Complications manifested with the appearance of the composer Richard Wagner.  Without Ludwig, Wagner would not have had the worldwide renown his name enjoys today.  It has been not so subtly rumored that Ludwig had an homoerotic attraction to the composer.  The king was overly generous in his financial support of Wagner. The relationship ended when the official government refused any further financial support of Ludwig’s idolisation. This was a major heartbreak for the King.

In an effort to resolve his narcissistic nature and his suspected homosexuality, Ludwig politely agreed to a courtship with Sophie, the younger sister of the Austrian Empress Elizabeth. He felt unnerved and unhappy about the looming marriage, so Ludwig continually postponed the wedding date.

Finally, the angry father of the bride set an ultimatum.  Ludwig used this as his excuse to cancel the marriage.  The close-call with marriage and his country’s defeat to the French-Prussian alliance were further turning points in his life. The stage was set for Ludwig’s ultimate escape into architectural fantasyland.

The remainder of the book consists of the photographic depictions of the king’s majestic buildings: Neuschwanstein Castle, Herrenchiemsee Castle, Linderhof Castle, and Königshaus am Schachen. The last structure is Ludwig’s favored hunting lodge. The exteriors are massive and impressive, almost beyond belief.  The interiors are stunningly gorgeous, almost to the point of gaudiness.  I can’t get over the sheer numbers of huge crystal chandeliers.  To light all the candles must have taken several hours.

The exterior building shots and photographs of the Bavarian countryside have the natural blue tone of late evening dusk.  The photography of Gregor Schmid is highly emotive in this regard. The collection is more than a simple coffee table book.

Self-Induced Loneliness Ludwig II is still available as a Kindle edition.  The hardcover paper and ink version can still be had at online sellers.  Or you may accidentally stumble across a copy at a thrift store as I did.

The Blue Jay of Happiness quotes Rita Rudner. “Neurotics build   castles in the air, psychotics live in them. My mother cleans them.”

An eclectic guy who likes to observe the world around him and comment about those observations.
View all posts by swabby429 →
This entry was posted in art, Books, Controversy, cultural highlights, History, Politics and tagged German history, King Ludwig II of Bavaria, photography books, thrift stores. Bookmark the permalink.