When most of us think about supersonic airline service, we instantly think of the Anglo-French Concorde.  Likewise, most people think the Concordes were the only supersonic transport (SST) planes ever put into commercial service.  Actually, the USSR got a two-month jump on the Concorde with their own SST, the Tupolev TU-144.

The first ideas for SSTs were hypothetical projects proposed on both sides of the Iron Curtain. There were design prototypes intended for military use as possible bombers and transports.  Aircraft manufacturing companies proposed their own designs in the pursuit of lucrative military contracts. It was from these efforts that the possibility of building a civilian SST were realized. The Soviet SST concept began in the early 1960s. Journalists in the West first received official Soviet reports about the TU-144 project in 1965.

The Soviet SST design relied upon earlier research for the USSR’s TU-125 and TU-135 bombers. The design experience enabled Russian engineers to study and experiment with large aircraft that could fly at Mach 2 speeds (twice the speed of sound).  The preliminary design plans were conceived under the supervision of Alexei Tupolev, the head of the Soviet Design Bureau.  Those plans were publicly released in January of 1962. 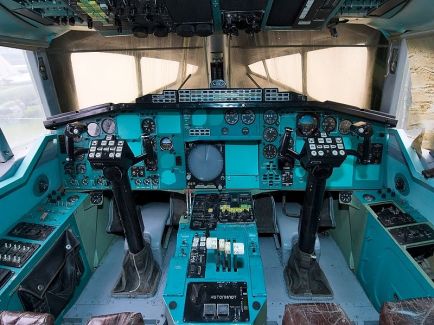 The go-ahead for further development and ultimately the manufacture of a civilian supersonic airliner became official policy with the Resolution of Council of Ministers of the USSR and the Decree, both of 1963.  Soon, the SST project was elevated to one of the main, priority efforts of the Soviet Ministry of Aircraft Industry.

By late 1968, prototype “044” was ready for its maiden flight.  After preliminary ground rolling and engine tests, the craft lifted off on December 31st from the air field at Zhukovskiy, near Moscow.  The initial flight lasted just less than an hour.  It was the first time an SST airliner had ever flown.  The Soviet milestone was matched on March 2, 1969 when the prototype of the Anglo-French Concorde flew its maiden flight.

The first public appearance of the Tupolev TU-144 airliner, in the West, was at the 1973 Paris Air Show.  This event proved disasterous to the Soviet Aeronautics industry.  During the TU-144 exhibition flight, the French Air Force sent up a Mirage fighter jet to photograph the Soviet airliner in flight.  Unfortunately, the French failed to tell the Russians about the French fighter plane. The SST crew immediately found itself on a collision course with the fighter.

While trying to avoid crashing into the French airplane, the TU-144 pilot stalled out the airliner.  As the pilot tried to recover from the stall, the radically steep climb overstressed the SST’s airframe, causing the TU-144 to break-up.  The pieces fell to the ground as television cameras recorded the entire event.

It was back to the drawing board because the production model of the TU-144 was judged not-airworthy for passenger use.  Modifications were made, including retractable canard mini-wings just behind the cockpit to improve sub-sonic flight, a longer fuselage, and larger wingspan.

The improved TU-144S was placed in service by Aeroflot in 1975 for cargo and mail flights. In 1977, passenger service began between Alma Ata and Moscow. Passenger service was shortlived because a second fatal mishap resulted in the end of TU-144 commercial operation.  After the accident, the last commercial flight was on June 1, 1978.

That was not the end of the Tupolev TU-144. An improved TU-144 was introduced for use as a research airplane. The last one built was the TU-144LL. That airplane was operated jointly by the Russian Republic and the United States. NASA flew it several times as a part of their “High Speed Civil Transport” research project.

The Blue Jay of Happiness thanks The Russian State Civil Aviation Administration and NASA for much of the background information used for this post.

An eclectic guy who likes to observe the world around him and comment about those observations.
View all posts by swabby429 →
This entry was posted in Controversy, cultural highlights, History, Politics, Science, Transportation and tagged airliners, Concorde, NASA, Russian Republic, SST, Tupolev TU-144, USSR. Bookmark the permalink.

3 Responses to The Soviet SST