Regarding The June 1987 Earthquake

The only personal memory I have of a minor earthquake in the Midwest in 1987 is finding a short story about it on the AP newswire in the overnight summaries. There were also a couple of mentions in the sports wrap-ups.  I remember it because all the fuss people made of the little temblor seemed way out of proportion to the actual event.  As a former resident of the San Francisco Bay Area, I remember some stronger rumblings that barely got a mention in the news of the day. Anyway, it was a slow news night, so I included the story in a few overnight newscasts. 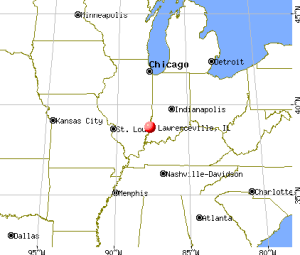 The minor shaker happened at 6:49 pm Central Daylight Time and was centered in Lawrenceville in southeastern Illinois. There was mention of one very minor injury. Apparently a girl from Lawrenceville received a few cuts after she was struck by a bunkbed.

The sports story account is a bit more amusing. The rumbling was felt at Tiger Stadium in the bottom of the first inning during the baseball game with the visiting Cleveland Indians.  Announcers in the press box said the stadium shook for a few seconds and frightened many of the fans. Evidently, Detroit’s Kirk Gibson was unflappable. Gibson pounded a triple to center field immediately after the earthquake.

Followup stories said the June 10th quake was centered near Evansville, Indiana in Lawrenceville, Illinois. The National Earthquake Information Center in Golden, Colorado said the temblor was a moderate shaker that registered 5.0 on the Richter Scale. Earthquakes of that magnitude have been known to cause considerable damage, depending upon location.

Janet Clem looks at the damage to her home in Mt. Carmel after the 5.2 early morning earth quake.

Except for the minor injury, there was only minor damage. A small portion of a roof caved in. There were also scattered reports of broken windows and interruption of telephone service.  Alarms were triggered at the nuclear power plant near Red Wing, Minnesota.

Compared to the rest of the world, the North American Midwest is a fairly quiet place as far as seismic activity is concerned. There have been less than 15 quakes of any significance during the 20th Century. The two worst North American temblors of the century were of historic proportions.  The 1906 San Francisco quake was a magnitude 8.3 event that claimed over 700 lives. The 1964 Alaska quake registered 8.5 on the Richter Scale and killed 114 people.

I only mention the June 1987 earthquake because it is reminiscent of most naturally caused quakes. The big news, these days, regards manmade earthquakes.  Among the other purported hazards linked to hydraulic fracturing or fracking, are earthquakes.

The actual process of fracking involves the injection of around 4,500,000  gallons of water, sand, and chemicals into a well to crack the bedrock and release oil and natural gas. Supposedly, the process, itself, rarely causes noteworthy earthquakes.

Geologists have now linked the disposal of wastewater and chemicals to the spate of earthquakes near fracking sites. When the fluids return to the surface, it is disposed of by injecting it into separate disposal wells, deep underground.  This method had previously been regarded as the most cost-efficient way to dispose of it.

Recently in fracking areas near Dallas-Fort Worth, Texas and in Oklahoma earthquakes have been caused.  The quakes have been increasing in strength and in numbers. I was surprised to find out that there are some 50,000 disposal wells that serve over 216,000 active mining wells in Texas, according to the Texas Railroad Commission.

When millions of gallons of wastewater are injected into a fault, there is less friction between portions of the rock layers. Because the liquid acts like a lubricant, the faults can actually slip.  Movement of layers at a fault are defined as earthquakes.

These findings are decades old. The latest incidents have been explained by previous research by the US Geological Survey (USGS). The bureau says that case histories have backed up scientific consensus that hydraulic fracturing operations can induce earthquakes as strong as 5.0 on the Richter Scale.  These findings have been verified by studies at the University of Texas at Austin and scientists at Southern Methodist University.

Even though there have been no reports of major damage from these manmade earthquakes. Most of them range around 3.0 magnitude. Some have been as strong as 3.5. Generally, earthquakes that cause damage, have to be at least 4.0 magnitude. Residents and officials are becoming more concerned about the increasing number and strength of these manmade quakes. The USGS believes the quakes will certainly become stronger as time passes.

Of course, earthquakes are only one of several other dangers associated with fracking. Discussion about the controversies linked to fracking continues by concerned parties, across the nation. The fracking question promises to provide us with news stories into the foreseeable future.

The Blue Jay of Happiness is reminded of a quote by Charles Francis Richter. “In every area of the world, there is earthquake risk.”

An eclectic guy who likes to observe the world around him and comment about those observations.
View all posts by swabby429 →
This entry was posted in Controversy, cultural highlights, Environment, History, Politics, sports and tagged baseball, earthquakes, fracking. Bookmark the permalink.

2 Responses to Regarding The June 1987 Earthquake