Even scientists knew very little about the physiological effects of spaceflight in the middle of the 20th Century. Some worried that astronauts would suffer cardiovascular failure in the  weightless or low weight environment of space.  Researchers decided to place animals into space to understand its effects on life.

The first American spaceflight research was highlighted by the use of V2 Rockets captured from Nazi Germany at the close of World War Two.  In fact, both the US and the USSR based much of their space program technology and research on captured hardware and scientists.  By the late 1940s many of those rockets were adapted to carry special sensors and equipment.

In the early 1950s, the US government launched a few of these V2 rockets to test how well their equipment would work in Outer Space. There was just enough room in the top of the rockets to provide a place for an early space capsule. Small animals, like monkeys, were to be used in the first experiments about space flight and life.

The first rhesus monkey sent into flight on a V2 was Albert I.  The flight took place of June 11, 1948. The rocket did not reach the Kármán line of 100 km that designates the official beginning of Outer Space. The rocket only reached 63 km that day. Unfortunately for Albert I, the air supply system failed, so he died, mid-flight.

On June 14, 1949, another male rhesus monkey, Albert II was readied for his mission. He was anesthetized, afterwards, implants and sensors were placed on his body. He was then placed inside the small capsule in a V2 Rocket.

Albert II, was carried up to a height of 134 km (83 miles).  It was just enough to qualify as an Outer Space flight. This time, the monkey survived the launch.  Unfortunately, a parachute failure on the recovery capsule sealed Albert II’s fate. The creature was killed from the force of impact while landing. The mechanisms for recording electrocardiographic and respiratory data survived the crash. The hoped for information was successfully recorded up to the moment of impact. 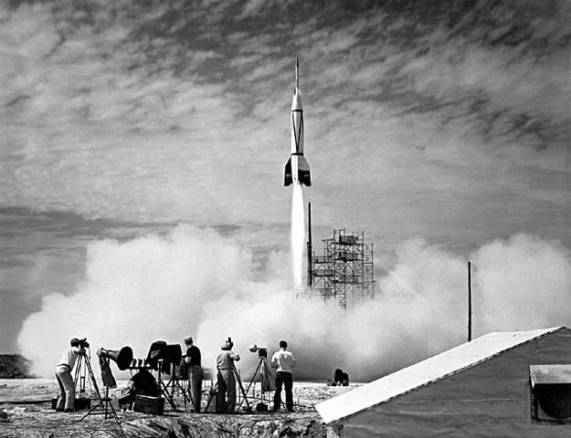 The other “Alberts” were victimized during their V2 missions, too. Albert III was killed shortly after lift-off when the V2 Rocket exploded at 10.7 km (35,000′) on September 19, 1949.  Albert IV was the last monkey passenger on a V2 Rocket. He was launched on December 8, 1949. His capsule reached 130.6 km. Albert IV suffered the same fate as Albert II. He died on impact after the parachute failed to deploy properly.

After further flights of monkeys and apes aboard more advancedd rockets specifically designed for research, it was established that humans could survive the weightlessness and increased radiation of Outer Space. Subsequent research concentrated more on mice and insects because they take up less room on space flights, and are easier to care for.

The Blue Jay of Happiness quotes Wernher von Braun. “Don’t tell me that man doesn’t belong out there. Man belongs wherever he wants to go–and he’ll do plenty well when he gets there.”

An eclectic guy who likes to observe the world around him and comment about those observations.
View all posts by swabby429 →
This entry was posted in cultural highlights, History, Science, Wildlife and tagged rhesus monkeys, space exploration, V2 Rockets. Bookmark the permalink.