Do you play an instrument or sing? Perhaps you just enjoy attending impromptu musical events. Many areas around the country and the world are celebrating Make Music Day or Fête de la Musique.

The first motivation for this annual, daylong celebration came from the American musician and producer Joel Cohen, who spent a couple of seasons with France Musique (French Public Radio).  Fête de la Musique was later made official and first celebrated on June 21, 1982. It is now the world’s largest annual music event.

Fête de la Musique is usually celebrated as Make Music Day in the US.  Some of the 20-plus cities hosting the events include New York, Nashville, Los Angeles, San

Unlike most music festivals, Fête de la Musique or Make Music Day is open to anybody who wants to share her or his musical talent. Because the talent base is so broad, attendees can enjoy music from many genres. Rock, garage bands, Latino jazz, Salsa, classical, chamber, opera, folk, whatever. The events are coordinated, in the US, by the nonprofit Make Music Alliance. 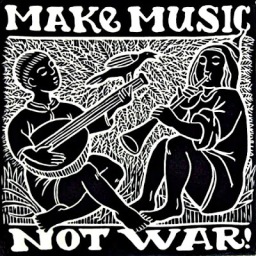 There will be Mass Appeal Guitars, Mass Appeal Horns, Mass Appeal Harmonicas, even Mass Appeal theremins. Something new is the Mass Appeal littleBits. Easy to play electronic instruments will be distributed in ten of the Make Music Cities. Players will gather their synthesizers and perform over the Internet’s “cloudBit” in a live Web concert.

Of course, if you are able to do so, Fête de la Musique is best enjoyed in its original city. There will be favorite artists and impromptu alley shows.  Classical fans will gather at the Palais Royal.  Meantime indie fans will mosh at Denfert-Rochereau. The Paris Metro will probably be packed with musicians and singers in a whirlwind of fun and enjoyment.

The Blue Jay of Happiness likes this:
“Music is a higher revelation than all wisdom and philosophy.
Music is the electrical soil in which the spirit lives, thinks and invents.”
— Ludwig van Beethoven

An eclectic guy who likes to observe the world around him and comment about those observations.
View all posts by swabby429 →
This entry was posted in art, cultural highlights, music and tagged Fête de la Musique, Make Music Day, music, music festivals. Bookmark the permalink.