A Few Things About Pema Chödrön

Once you overlook her purple robes, you notice that Pema Chödrön is a funny, honest, down-to-earth, person. Even though she is a rarity in the Tibetan Buddhist community, a bikhsuni (nun) in the Vajrayana way, she brings practical wisdom to

people.  If you’re familiar with Chödrön, you probably know her through her books. Some people are fortunate to have taken in one of her public appearances or lectures.

Chödrön was born Deirdre Blomfield-Brown in New York City on July 14, 1936. The young Deirdre was the youngest of three siblings who grew up in rural New York. At age 21, she first married and had two children. After a move to the San Francisco Bay Area, she graduated from the University of California, Berkeley with a bachelor’s degreee in English literature.

Her post-graduate work earned her a master’s degree in elementary education. During her second marriage, Deirdre taught grade school pupils in California and New Mexico. After a second divorce, she converted to Buddhism.

She began her studies with Lama Chime Rinpoche in France. Then, in 1972, she met the popular teacher Chögyam Trungpa Rinpoche. At Lama Chime’s urging, she began her studies with Chögyam Trungpa. In 1974 she was ordained a Bikshuni and received her new name, Pema Chödrön. She became a fully ordained teacher in a combination of lineages in 1981, in Hong Kong.

After Chögyam Trungpa Rinpoche’s death in 1987 his son, Sakyong Mipham Rinpoche appointed Chödrön as a senior teacher (acharya) in the Shambhala lineage.  Since 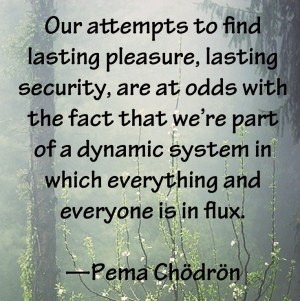 then, Chödrön has been working to reestablish full ordination for female Tibetan Buddhist monastics.

In 1980 Chödrön was appointed as the director of the Shambhala Center in Boulder, Colorado.  At this time she came down with chronic fatigue syndrome. Chödrön moved to Gampo Abbey in Nova Scotia, Canada in 1984.  The new location plus closer attention to her diet aided her health condition markedly.

After helping establish Gampo Abbey, she wrote The Wisdom of No Escape And the Path of Loving-Kindness along with Start Where You Are: A Guide to Compassionate Living. Ever since then, Chödrön has release dozens of print books and audiobooks, plus several DVDs of lectures.

Although Pema Chödrön is highly trained in arcane knowledge, much of her focus regards bringing deep Buddhist philosophy to the everyday life of regular people. Her books and talks are based on teachings of compassion, the root of happiness and well-being. Chödrön teaches that compassion and empathy can grow from the manner in which we deal with difficulties and pain.

The foundation of Chödrön’s teachings is the Buddha’s admonition not to struggle against pain, but to work through it. Part of that working through involves meditation and its applications in day to day life. If you read one of Chödrön’s books or listen to her speak, you may feel motivated to practice compassion and empathy in your daily life. This is the most effective way to awaken our inner wisdom.

The Blue Jay of Happiness ponders this short Pema Chödrön wisdom teaching: “You’re the only one who knows when you’re using things to protect yourself and keep your ego together and when you’re opening and letting things fall apart, letting the world come as it is – working with it rather than struggling against it. You’re the only one who knows.”

An eclectic guy who likes to observe the world around him and comment about those observations.
View all posts by swabby429 →
This entry was posted in Books, Contemplation, cultural highlights, religion and tagged Chögyam Trungpa Rinpoche, Lama Chime Rinpoche, Pema Chödrön, Sakyong Mipham Rinpoche, Shambhala tradition, Tibetan Buddhism. Bookmark the permalink.

1 Response to A Few Things About Pema Chödrön