The name “Telstar” is one of the most well-known names for manmade satellites, and other things.  In fact, during the time that the original Telstar satellites were in service, polls discovered that Telstar was a more recognizeable name in Britain in 1962 than Sputnik was in 1957.

So, how did Telstar get its catchy name?  In November of 1961, NASA endorsed the name selection as the name for this project. Telstar is a contraction of “Telecommunications” and “star”. The name was coined at AT&T’s Bell Laboratories. Telstar I, was the very first “active-repeater” communications satellite.  It was also the first privately financed satellite, that’s why a private firm provided its name.

Prior to Telstar, communication satellite experimentation was carried out by bouncing electronic signals off of large, inflated satellites, like the “Echo” series. The Echo satellites were “passive-repeater” communications satellites.

Until Telstar satellites were blasted into orbit, live television broadcasting across the oceans was impossible. Any film or taped television coverage was air-freighted. Thus, moving picture coverage of news, sports, or international events was greatly delayed, judging by today’s standards.

The early Telstar satellites were only able to broadcast events for about 18-minutes at a time because they were not in geosynchronous orbit.  Telstars were in “lower” orbits, so they whipped around the Earth at much the same speed similar to that of today’s International Space Station.

The telecommunications industry had to wait until more powerful rockets were developed that could launch satellites into the much higher orbital paths that allowed satellites to “park” in one place over the Earth. Geosynchronous means that the orbital speed of the satellite coincides with the surface motion of our planet. Today, geosychronous communications satellites are so common, we take them for granted. Even though the early Telstar satellites were incapable of geosychronous travel, they were a momentous development in communications and broadcasting technology.

Bell Laboratories constructed six nearly identical Telstars, but only two were actually launched and placed into service.  The company contracted with NASA for $6,000,000 ($50,000,000 in 2015 dollars) to launch their satellites. The original 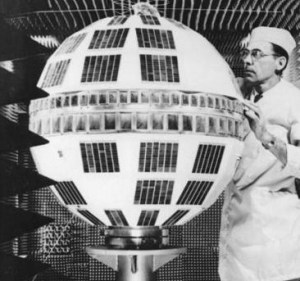 Telstar I was launched on July 10, 1962. Its first television images were non-public. A flag at the Maine Earth Station was transmitted to France on July eleventh. In the afternoon of July 23, 1962, at 3:00 PM US Eastern Daylight Time, the first publicly accessable live transatlantic TV broadcast was aired.  It was broadcast simultaneously by BBC, Eurovision, ABC, CBS, NBC, and CBC. The program featured Walter Cronkite of CBS, Chet Huntley of NBC, and Richard Dimbleby of the BBC.

The first transatlantic images were of the Statue of Liberty and the Eiffel Tower. President John F. Kennedy had originally been scheduled to make the first official statements but he was not ready at the time the satellite had been activated for the broadcast. To fill the time until the President was ready, a very short segment of the Phillies vs. Cubs game in Chicago was shown, then President Kennedy spoke from Washington DC, then a scene from Cape Canaveral, Florida, next was a short segment of the Seattle World’s Fair, then signals from Quebec and finally, Ontario.

While I wrote this post, I thought about some of the consumer products that have used the “Telstar” name in some form. The very first record I bought as a boy was The

Tornados’ instrumental single “Telstar”.  When AT&T split up, consumers were given the option of purchasing their old Bell System phones.  I had been using a “Telstar” telephone. It was so stylish that I purchased it from Northwestern Bell. That Telstar is still my bedside phone.

I searched for other instances that Telstar has been used as a trade name or part of a company name. It turns out that there is a Telstar lightbulb company. I found a Telstar Hotel located in Exeter, England. There’s a football club in Velsen, Holland named “SC Telstar”. Many mechanically minded people consult an online technician service called “Telstar”. Maybe you want to buy some heavy duty parts from Telstar Hydraulics in Sudbury, Ontario. plus Telstar Satellite, a building contractor in Cozad, Nebraska.

A biotech firm in Singapore is “Telstar Products”. Telstar Industries in New York State sells “Telstar Wasp and Hornet Killer”. Some beautiful, out of this world wristwatches carry the brand name “Telstar”. If you live in Australia, you may have driven or seen a “Ford Telstar” automobile. If you live in Bethel, Maine, you might have been a Telstar High School Rebel. I could go on and on.

The Telstar name is still used on telecommunications satellites. A “300” series of Telstars went into orbit in the 1980s. There’s a Telstar 18 in geosynchronous orbit that was launched in 2004. There is also a “Telstar Satellite Corporation of America”.

So, if you ask me if I remember Telstar, I’ll probably ask, “Which Telstar are you talking about?”

The Blue Jay of Happiness quotes Steven Wright. “Every now and then, I like to lean out my window, look up, and smile for a satellite picture.”

An eclectic guy who likes to observe the world around him and comment about those observations.
View all posts by swabby429 →
This entry was posted in cultural highlights, Entertainment, Gadgets, History, Science, Youth and tagged AT&T, Bell Laboratories, brand names, Echo satellites, NASA, telecommunications, Telstar. Bookmark the permalink.

1 Response to Which Telstar?