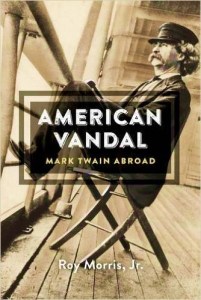 We Mark Twain junkies are happy to find yet another biography about our favorite writer on the shelves.    Fortunately, for the general public, the most recent publications by and of  the life and times of Samuel Langhorne Clemens, have been released at well spaced intervals.

The latest Twain-related book to come home with me, American Vandal: Mark Twain Abroad, was written by Roy Morris, Junior. Morris is a former correspondent and reporter for the “Chattanooga News-Free Press” and the “Chattanooga Times”. He was employed as an historical consultant for the A&E Network, and the History Channel. Morris was also the founding editor of “America’s 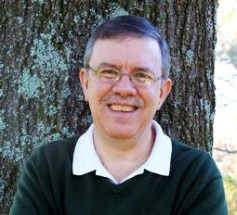 Civil War” magazine. He is the current editor of “Military Heritage” magazine, and has written four books about the Civil War era.

Twain’s biographers and literary scholars usually point to Clemens’ opinion of humanity growing darker as he got older. Morris appears to be of that school of thought, to some extent. Twain was an unorthodox man and this aspect was reflected in his speaking and writing. In addition, Twain’s work takes place with the perspective of an outsider analyzing the workings of society. These points of view are readily apparent to even the most casual reader.

Twain was one of the greatest prose stylists and observers of human behavior.  His travel writing reflects this asset best.  Morris uses this aspect as the theme of American Vandal.  He uses  Twain’s three major travel books as the framework for this biography.

Twain’s The Innocents Abroad introduces us to the idea of the American vandal. This stereotype was a rough-hewn, unapologetic American tourist souvenir hunter. The “Innocents” is a self-portrait of Twain’s younger years. The book is the most famous of the three.

The second book, A Tramp Abroad, corresponds to the middle of Twain’s prolific career. This is the book that made Twain rich and famous.  It was sold to middle class readers who enjoyed the new genre of travel literature.  Twain had just married Olivia Langdon to start his life as a family man. The destinations and descriptions of his travels display Twain’s deepening maturity.

Twain’s evolved perspective comes through with Following the Equator. Twain’s and American tourists’ tourism matured to a more sophisticated, reflective type of travel. At this time, Clemens was nearly bankrupt due to his unwise investments and lavish lifestyle. Following the Equator is social commentary regarding the imperialism of the British Empire along with a strong rebuke of racism.

Morris uses these books and related works as jumping off points to describe Mark Twain’s life. We see a broader, more tragic person than the familiar Midwesterner most people associate with Tom Sawyer and Huckleberry Finn. Because of Twain’s numerous travels and his own personal tragedies, he became more sympathetic to the plight of mankind. Morris’ book goes to the heart of the Twain caricature by revealing more of the man named Samuel Langhorne Clemens. 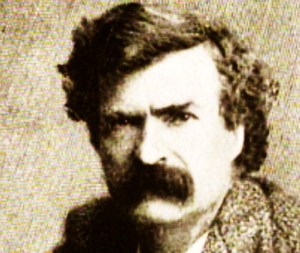 In the end, Morris seems to concur with my opinion that Twain didn’t become a darker, pessimistic person as he aged. Twain became a deeper, more passionate man who experienced a full spectrum of emotions. He was not really a pessimist, because pessimists don’t feel the empathy displayed in Twain’s best works. Twain’s travels broadened his mind and character.

I hope that the casual reader, who picks up Roy Morris, Junior’s American Vandal: Mark Twain Abroad, will be inspired to read Mark Twain’s less famous books and essays.

The Blue Jay of Happiness likes Mark Twain’s barbed comments, like this one, “Patriot: the person who can holler the loudest without knowing what he is hollering about.”

An eclectic guy who likes to observe the world around him and comment about those observations.
View all posts by swabby429 →
This entry was posted in Books, cultural highlights, Travel and tagged biographies, Mark Twain, Roy Morris Junior, writing. Bookmark the permalink.