I understand that archaeological evidence consisting of spear tips, arrow heads, blunt force damage to human bones and similar artifacts has been dated back many thousands of years.  This is apparently proof that humans and our predecessor species have engaged in violent conflict since long ago and frequently.

Unpeaceful, brutish behavior seems to be our nature.  To counter disputes and barbaric behavior, many spiritual people have advocated for peaceful resolution of 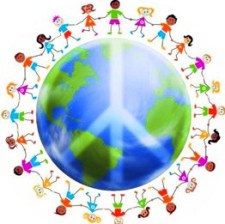 disagreements.  These have taken the form of religious cults or, more recently, organizations that promote peace in the world.

Despite efforts to the contrary, great divisions exist because of religious opinions, tribalism/nationalism, class, race, political views, and desire for territory. We see where groups of people wish to force their ideologies upon other groups of people.  We are the only species of animal that kills one another over mere beliefs and ideas.

It’s easy to cynically chalk up warfare to immorality, divisiveness, cruelty, and other people’s misbehavior.  Regardless of society, human culture has been created by human beings. That means, we should supposedly be able to change it.

Each of us, individually, is a part of humanity, and thus, morally responsible for our parts within society.  I don’t use the word “morally” in a self-righteous, self-satisfied, moralistic tone.  I use it in the sense that morality really boils down to our awareness of behavior and events and how we contribute or don’t contribute to the overall well-being and happiness of our fellow humans. Until each of us accepts responsibility for our own disagreeable opinions and behavior, we will continue to suffer strong disputes and wars.

Social strife, disputes and war have been going on for as long as any of us remember.  History books give witness to this fact. Every form of moralistic condemnation, terrorism, greed, interpersonal violence, revolt, and war are not only taking place in the physical world; all of these begin by taking place in our minds and hearts.

Most of us honestly desire global peace. We do not want our family members sent off somewhere to kill and be killed. Yet we passively accept the messages of those who advocate beliefs, concepts, ideals, dogmatism, and acquisition.

We allow ourselves to be molded by particular traditions, superstitions, beliefs, partisanship, and cultural norms. Only a small percentage of the population bothers to question any of this conditioning. Why do people fall in line with the easy way out of deep thought? Mainly because it’s easy, not difficult.

So, what do peace-loving people need to do? Must we join a particular religion, organize yet another activist group, or march together on the streets?

Each of us has inner conflicts of some sort. One might be in the throes of an existential crisis or there might be a disagreement with a loved one or an adversary. We also feel the tug of a religious, or political advocate for or against an ideal or groups of “other” people. It is the process of mindlessly allowing oneself to take the easy way out and accept the in-group’s default point of view.

Ultimately, whether one is conscious of it or not, we are each responsible for the love and compassion we give and receive.  It is completely up to us whether or not to accept people as they are. When people feel genuine acceptance, we are more likely to come together and engage in rational discussions.

In the end, whether we pigeon-hole ourselves as Christians, Muslims, Buddhists, Jews, Atheists, conservatives, libertarians, liberals, straight, gay, bisexual, Americans, Russians, Argentinians, and so forth, we are all human beings, first and foremost. As we ponder the headlines and news stories about disagreements and wars, it is important to understand the ultimate roots of all this violence.

It is my hope on this International Day of Peace, that we not only wish for peace on Earth, but understand our own, personal shares in the peace process, each and every one of us.

The Blue Jay of Happiness contemplates a statement from Godfrey Reggio. “I think it’s naive to pray for World peace if we’re not going to change the form in which we live.”

An eclectic guy who likes to observe the world around him and comment about those observations.
View all posts by swabby429 →
This entry was posted in Contemplation, Controversy, cultural highlights, History, Politics, religion and tagged ideology, individual responsibility, peace, politics, religion, war. Bookmark the permalink.

1 Response to International Day Of Peace