While flipping through some old papers the other day, I stumbled across a quotation by the esteemed Indian poet, Rabindranath Tagore, that caused me to stop and ponder life for awhile.  “We come nearest to the great when we are great in humility.”

understand the implications of their actions. Tagore’s statement also caused me to think about false humility.  Bragging about ones humility, indicates the opposite.

What is it about humility that makes it one of the most praiseworthy of the ancient virtues yet seems to be largely disregarded?  These days, pride in being the best, the strongest, the wealthiest is touted as an admirable quality.

A person can compare pride and humility to the radioactive core of a nuclear power plant. Pride is the Uranium-235 that gives off huge amounts of energy. U-235 is a highly dangerous material that can cause immense harm if not controlled.   Humility could be compared to the neutral “control rods” of the power plant. The neutral rods enable the operator to control aspects of the reactor and enable the fuel by using controlled heat to create steam to yield electricity from turbine generators.  We understand the effects of an out of control nuclear fuel in the case of the Fukishima disaster.

Likewise, if we take the energy of pride and control it with humility, we get someone like Gandhi. Otherwise, out of control pride brings us tyranny, the likes of a Hitler or a Stalin.  In both instances, an imbalance, one way or the other, leads to big problems.  Too much power leads to disaster; too much control leads to inertia. 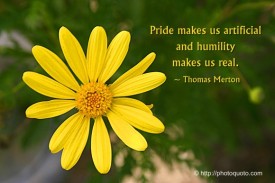 The overabundance of pride has been known as a harmful quality since the days of antiquity.  The ancient Greeks called it ὕβρις or hybris, which we know as hubris.  Loosely defined, hybris/hubris was the denigration and shaming of an individual for the goal of gratification or pleasure of the perpetrator.  Examples of hubris include the taking of public property (the commons) for private use with no or inadequate compensation to the public. More violently, we find that hubris includes rape or assault and battery.

We think again of Adolf Hitler. He is a prime example of pride gone awry.  His extreme hubris was magnified into Nazism.  Hitler’s excessive pride expanded into a national force which caused the immense disaster of World War Two. This excessive pride led to the eventual massive fall and destruction of Germany along with the self destruction of the prideful tyrant.

Hubris is still alive in its many manifestations, from political and corporate leaders to individuals who seek to control the lives of their peers.

Meantime, humility is one of those odd virtues that seems counter-productive on the surface. Humility takes its place in equal measure with courage, justice, temperance, prudence, and tolerance. Careful reflection enables us to see how one virtue enables and strengthens the others.

Ancient philosophers taught that if a person cultivates all of these virtues in equal measure, that person becomes truly admirable.  If even one of the virtues is neglected, the person falls sadly short of greatness.

We can easily see that the classic virtues are rarely practiced these days as a complete set.  One or another is usually stressed to the detriment of others.

When practicing humility, a person must be watchful of falling into self-humiliation and passivity. In its extreme form, humilty can lead to needless self-sacrifice.  Here, 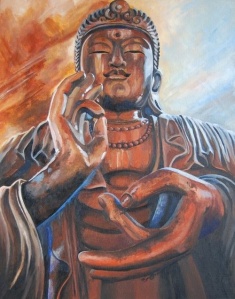 again, is why balance is important. Humility is truly virtuous when used in concert with the other qualities of character.

All of this thinking and writing about hubris and humility might seem old fashioned and irrelevent.  The talk about virtue appears to be a conversation from the Victorian Era and rather stuffy.  Such categorization stems from imbalance.

In my opinion, when humility is not included in the mix, the other virtues can easily lapse into hubris.  Inclusion of humility provides the means to control the power of pride.

The Blue Jay of Happiness ponders this observation from Czeslaw Milosz: “To believe you are magnificent; and gradually to discover that you are not magnificent. Enough labor for one human life.”

An eclectic guy who likes to observe the world around him and comment about those observations.
View all posts by swabby429 →
This entry was posted in Contemplation, Meanderings and tagged hubris, humility, skillful living, virtues. Bookmark the permalink.

1 Response to Hubris and Humility