My neighborhood has so many trees that half of the streets are named after various species of trees. My yard and the neighboring vacant lot have 18 trees, mostly elms. The city property and the riverbank have so many trees, I have never counted them. The large tree population provides habitat for all sorts of small animals, including blue jays and squirrels.  This is delightful because I enjoy watching both the jays and the squirrels.

I wonder why somebody decided to name October as Squirrel Awareness Month and December as Blue Jay Awareness Month. The two creatures go together as mutual adversaries.  I notice more squirrels in December but no blue jays during that month in my town. As a matter of fact I see squirrels every day of the year.

Maybe October was chosen to salute squirrels because this is the time of year the little creatures concentrate on hoarding food for the wintertime.  They’re constantly scampering up and down trees or foraging through the yard for seeds and corn.  Meantime, they bury their caches in various places around the lawn. Maybe we’re supposed to be aware of squirrels now, because the critters might be more distracted than during the rest of the year.

Maybe we’re reminded to be aware of squirrels now, because they’re crossing streets more often, too.  I don’t know why squirrels start to cross streets just as vehicles approach.  Many times squirrels start to dart across the pavement, only to halt directly in front of the car. Then they make a snap decision to either proceed to the other curb or retreat to where they came from.  I’ve come close to running over squirrels too many times; fortunately the brakes on the ol’ Camry work very well.

I used to buy food for the squirrels that inhabit my trees, but I had to put a halt to the practice. They were increasing in number and some were so bold as to start gnawing 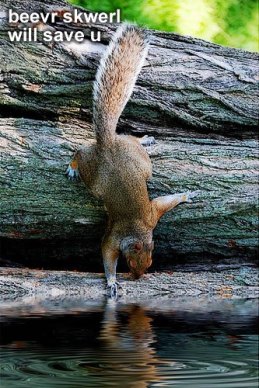 on the wooden threshold at the front door.  They probably noticed that I emerged from that door with their daily ration of corn and seeds; so they wanted to get direct access to the food source. The squirrels had morphed from being charming to annoying and pesky.  Now that the squirrels rely upon the generous bounty of the grove of trees in the river bank, they’re once again cute and charming little rodents.

I used to wonder how squirrels can find their buried cache, even under a layer of snow.  A friend, who is a county extention agent, says that the squirrel cracks a nut shell with its teeth. It then cleans the nut by rubbing it on its face or by licking it to apply an individual scent. Later in the winter, when the squirrel is hungry, the critter sniffs around for its own scent. As soon as it discovers the odor, the squirrel burrows down to the treasure.

Of course, I wanted to look up the etymology of the word, squirrel. My Webster’s says that it derives from the Greek word “skiouros” and the latin “scurius”. The words literally mean “shadow-tailed”. One source claimed that Aristotle meant for the name to convey the meaning, “he who sits in the shadow of his tail”. I can easily imagine the old philosopher sitting on a stoop as he contemplates the comings and goings of squirrels in a grove of trees.

I hope you can take a few moments each day of this month to stop your activity in order to observe the antics of squirrels.  Maybe they’ll bring you an unexpected lesson for living.

The Blue Jay of Happiness says squirrels are only cuter versions of rats.

An eclectic guy who likes to observe the world around him and comment about those observations.
View all posts by swabby429 →
This entry was posted in cultural highlights, Environment, Hometown, Meanderings, Wildlife and tagged Aristotle, blue jays, October, squirrels. Bookmark the permalink.