I looked at the Crockpot yesterday and tried to figure out how many batches of chili have been prepared in it. I bought the thing back in 1988, so I used that as the baseline. I prepare chili, from scratch, an average of twice per month, during the cold 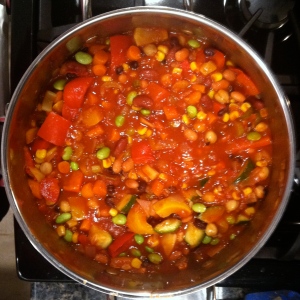 months from October through March. That figures out as approximately a dozen times. Using March of this year as the last month to prepare chili from scratch, I get 26 years (allowing for annual calendar overlap). So, all together, this particular Crockpot has cooked about 312 batches of homemade chili, give or take a few.

This small appliance still works quite well, so I plan to use it for at least another chili season.  Besides, what better way to prepare a comfort food, than to make it in an old, reliable, utensil? Psychologically, the food tastes better that way.

A couple of weeks ago, I prepared this month’s first batch of vegetarian chili, so the chili season at my house is already under way.  The ingredients are now ready for another batch that I’ll start later today.  I’m guessing that many people also begin chili season with a first batch in October, so the holiday creators that be, decided to add yet another commemoration to this already crowded month.

There seems to be thousands of chili recipes on the Web, in cookbooks, and individual recipe card boxes. Each one claims to be the absolute acme of chilis.  I like several because of their simplicity and time-tested successes.  Since I’m vegetarian, I only prepare meatless batches.  My meat eating friends even tell me they enjoy chili from my Crockpot.

To celebrate National Chili Month, I decided to share one of the chili recipes from my old recipe card box. An old college buddy sent it to me sometime back in the early 1990s. It calls for tempeh, a food made from slightly fermented soybeans and pressed into a patty. Tempeh can be found in some supermarkets and most health food stores.

1 15 ounce can of kidney beans
1 15 ounce can of black beans
(you can substitute an equal amount of dry beans, soaked overnight, if you wish.)
3 large tomatoes, chopped or 1 large can of tomatoes (your choice)
1 bell pepper (any color), diced
1 small onion, diced
2 chopped zucchinis
1 jalapeño pepper, diced (with or without seeds as you like)
6 ounces of crumbled tempeh
1 clove of minced garlic
1 teaspoon of chili powder
half a teaspoon of ground cumin
salt and black pepper to taste
some vegetable broth (optional)

First, switch your slow cooker on at the low setting. Add the chopped onion and chopped bell pepper at the bottom of your slow cooker. Crumble your tempeh into the cooker as the next layer. Then, add the diced jalapeño plus the spices. Then drain the beans and add them and the chopped tomatoes to the other ingredients. Set aside the zucchinis to chop and add later.

Cover the slow cooker and allow everything to simmer for about three hours. Don’t stir anything, yet.  Then chop the zucchinis and add to the hot mixture. The mixture can now be stirred to blend the ingredients. If the mixture seems somewhat dry, pour in some vegetable broth. Cover and simmer for another hour or so. The chili will be ready to serve after about four and a half hours total cooking time. Yields about four to six servings.

Not only will you have a tasty, healthy dish, your kitchen will be filled with the mouth-watering aroma of simmering spices.

This is only one option for you to try.  Of course, you can prepare a batch of chili using your own favorite recipe, meatless or with meat.  The idea is to properly celebrate National Chili Month.

The Blue Jay of Happiness likes to serve chili with cornbread and a good beer (or near-beer for tea-totallers).

An eclectic guy who likes to observe the world around him and comment about those observations.
View all posts by swabby429 →
This entry was posted in cultural highlights, Health and tagged chili stew, Crockpot, recipes, slow cookers. Bookmark the permalink.