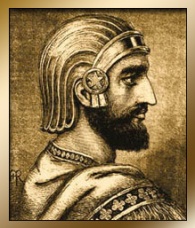 On the face of it, many of us might think it’s preposterous that an old Iranian was one of the main proponants of human rights.  After all, the modern day Iranian regime is infamous for enforcing strict religious law.  The subjugation of people who do not follow their narrow interpretation of doctrine are punished harshly and capital punishment is adminstered quite frequently for reasons we can barely fathom. In the minds of many, the modern Iranian regime symbolizes intolerance and oppression.

Furthermore, the Middle East must deal with the barbaric behavior of ISIS.  The radical fundamentalists have become infamous for their wanton destruction of human life and ancient treasures of humanity. These developments only compound the many oppressive regimes and harmful ideals found in many places on Earth, today.

Some 2,500 years ago Cyrus II ruled Persia. The king’s reign lasted about 30 years.  During that time, he became a legendary, historical figure.  Upon his ascent to the throne, Cyrus authored a sacred Cylinder. Among the inscriptions is one that

translates into the message, “Everyone is entitled to freedom of thought and choice. All people should pay respect to one another.” Cyrus began his own empire by conquering the Median Empire, the Lydian Empire, and later, the Neo-Babylonian Empire. He spread his message of tolerance wherever he went.

Persia’s own religion, Zoroastrianism had developed around this time.  It emphasised individual freedom to choose what is right and good. It included ideas from Cyrus’s conquered lands.  At the Eastern fringes of his empire were the portions of Ancient India that is now called Pakistan.  Some of these ideas from that area came from the Jainism and Buddhism that was present there.  These characteristics not only infused Zorastrianism, but went on to influence Judaism, then eventually Christianity, and early Islam.

A traditional story relates events of the day that parallels October 29, 539 BCE. On that day, Cyrus II made his triumphant entry into Babylon. Legends say the masses of oppressed peoples laid palm fronds at his feet.  Many of the people who greeted him were captives taken about 50-years previously by Babylonian forces. One group of these ex-prisoners were ancient Israelites who had seen their nation dismantled and their temple in Jerusalem destroyed.

King Cyrus permitted the people to return home to Judah to rebuild their cities and reestablish their religious practices.  Serious biblical scholars say that the Judeo-Christian Bible’s beginnings were in Babylon. Without Cyrus the Great’s mercy there would be no ancient Israel nor a rebuilt temple.

It was Cyrus’s tolerance that allowed the development and survival of the Torah or first books of the Bible.  Cyrus II is mentioned in several biblical passages as “the anointed of the Lord”. Throughout much of ancient history, the Jews thought of the Persians as allies and protectors against such conquerors as the Selencids and the Roman Empire.

Indeed, the most noteworthy accomplishment of Cyrus II was his work to promote human rights.  The king utilized the overarching power and authority of his political position. It was used in large part to decree his universal charter for human rights to apply for all peoples.  His law of tolerance advanced cultural, social, and religious precepts of the many tribes and nations of his vast empire. Ethnocentrism was an alien concept to this progressive-thinking leader.

The ideals of tolerance and freedom have continued to inspire people throughout history who have struggled to spread more humane forms of civilization. Cyrus the Great’s principles of unity in diversity have formed a template for progressive leaders around the World to adopt.

In these days of political division and religious sectarianism, it is wise to take stock of this vision of Cyrus the Great. It’s not too late to rethink our rigid thinking and adversarial positioning. This is the main idea behind the celebration of “International Cyrus the Great Day”.

People who work for human rights and personal freedoms around the globe, can take this time to renew the long conversation about tolerance and human dignity to serve the common good of all of us. This is the best way we can honor the legend of Cyrus II.

The Blue Jay of Happiness ponders Cyrus the Great’s advice to the leaders who followed him. “You cannot be buried in obscurity, you are exposed upon a grand theatre to the view of the World. If your actions are upright and benevolent, be assured they will augment your power and happiness.”

An eclectic guy who likes to observe the world around him and comment about those observations.
View all posts by swabby429 →
This entry was posted in Contemplation, cultural highlights, History, religion, Science and tagged acceptance, Cyrus II, human rights, intolerance, Iran, oppression, Persia, tolerance. Bookmark the permalink.