Now that we’re finally finished with high calorie holiday eating, it boggles my mind that somebody decided to designate today as National Buffet Day.  What were they thinking?  Obviously they were not enamored with New Year’s resolutions.

While chuckling at the inappropriateness of the observance, the memory of past smörgåsbord holiday feasts came to mind.  Smörgåsbords were a treasured family tradition before the demise of the second generation Swedish immigrants who were my ancestors. 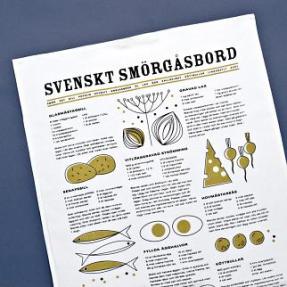 My great-aunt Emma was a person who honestly enjoyed creating smörgåsbords as part of family gatherings and reunions.  She had two types.  Small buffets of finger foods.  Sandwiches, salads, and desserts were presented at birthday and anniversary celebrations, some of these were potluck.  The second type was the grand smörgåsbord comprised entirely of traditional Swedish dishes. Emma prepared these for the family before or after Christmas.  These dinners were special, dress -up parties that reminded all of us about our heritage.

I once asked aunt Emma the meaning of the word “smörgåsbord”.  She told me the Swedish word “smörgås” means “open face sandwich” and “bord” is Swedish for “table”. In the old country, back in the day, smörgåsbord was just a small social courtesy that consisted of some appetizers and drinks.  It was more like our modern cocktail hour.  After the smörgåsbord, the guests were then ushered into the dining room for a more sumptuous, often formal, dinner.

Eventually, the little smörgåsbord evolved into something better. The formal dinner was dropped, and the friendly prelude grew into the large buffet-type dining experience of today.  Emma said that buffet dinners are a Swedish invention.   The rest of the world simply uses the name of a piece of furniture as the label for their versions of smörgåsbord.

Indeed, Swedes and other Scandinavians held small, informal smörgåsbords in the 1800s just as my great aunt had described.  The socializing hour took place in separate areas of the house for men and women, just before dinner.

“Smörgåsbord” (and its offshoot, buffet) only became popular because of the 1939 New York World’s Fair.  The Swedish Exhibition officials wanted to present the most popular Swedish foods to the huge numbers of fairgoers. The hosts adapted and enlarged upon the traditional concept of “smörgåsbord”.

Many of the attendees realized the convenience of serving food in this manner, so the idea quickly spread. Because the various dishes were arrayed on the sideboard table, or buffet table, its French name the name of the table became associated with the dining style.  Buffet is easier to say and remember than smörgåsbord.

From the late 1940s, onward, buffet style serving quickly evolved to the presentation of familiar American style foods and became the type of eating most of us know today. The term “smörgåsbord” was retained as the name for ethnic Scandinavian dinners.

These days, smörgåsbord dinners are usually served as holiday meals by people of Scandinavian ancestry.  Larger, more public smörgåsbords are sometimes presented in community halls or churches in towns that have Finnish, Norwegian, or Swedish descendants. For instance, Stromsberg, Nebraska has a smörgåsbord as a part of their Swedish Festival in June of each year.

What foods will you find at a typical Scandinavian smörgåsbord?  There are pickled herring dishes as ingredients in cassaroles or separately as relishes. Swedish

meatballs, creamy potato dishes, and lutefisk. Lutefisk is an acquired taste, which I never acquired.

You might prefer stuffed cabbage rolls, pea soup, or diced pork. Creamed dishes with onion highlights are traditional.  The family often joked that smörgåsbords are filled with foods that are as white as the driven snow. Even lefse and limpa (flatbreads) are white.

For dessert, many smörgåsbords have ostekake. I remember Emma’s ostekake as a sublime cheesecake, topped with lingonberries. Ostekake is one of the best words in the Norwegian and Swedish languages.

The next time you enjoy a buffet meal, remember to thank the enterprising Swedes who adapted smörgåsbord for the 1939 World’s Fair in New York.

The Blue Jay of Happiness likes buffets and smörgåsbords because there’s always something yummy for any taste.

An eclectic guy who likes to observe the world around him and comment about those observations.
View all posts by swabby429 →
This entry was posted in cultural highlights, Entertainment, History, Hometown, Youth and tagged buffet dining, ethnic scandinavian customs, Finland, Norway, Smörgåsbord, Sweden. Bookmark the permalink.