Aleksei says he is eager for Old New Year.  My new Russian friend has asked for a few days off at work so he can be in Moscow to visit his sister’s family for the traditional holiday observance that will happen tomorrow.

Aleksei’s sister, Kristina, is an Orthodox Christian who celebrates the changing of the church year according to the obsolete Julian calendar. The family will be together to celebrate with traditional, old  customs like singing and a special large dinner. The Old New Year’s Day is when Aleksei’s family also enjoys a mellow day of catching up with family “news” and remembering the past.

Kristina and Aleksei grew up during the Soviet era, so they celebrate the “New” New Years Eve and New Year’s Day according to the modern calendar.  The “New” holiday is even bigger than Christmas.

This year, the family braved the weather and the crowds to take in the New New Year’s Eve celebration at Red Square.  Aleksei said the crowd was especially large this time and the fireworks display was as spectacular as always. He says the New New Year’s partying in Moscow is similar to celebrations in most large cities around the world.

My friend explained that the nation of Russia used the old Julian calendar until the modernization that took place after the Bolshevik Revolution of 1918. Many major reforms began around that time, including the streamlining of the Cyrillic alphabet and other efforts to modernize the culture. For various reasons, including friction between the Soviet regimes and the Russian Orthodox Church, the church officials never did adopt the “new” Gregorian calendar.  So, today, January 13th on the Gregorian calendar, is December 31st on the Julian calendar.

Aleksei explained that the “Old” New Year observance began at the end of 1699 (Julian Year) by decree of Emperor Peter the Great.  Even though, a decade later, Western European nations had adopted the new Gregorian Calendar, Russia kept the old Julian

Calendar. This is when Western Europe’s celebration of New Year’s Day no longer coincided with that of Russia and much of Eastern Europe. The official Russian calendar finally switched over to the Gregorian system following the 1918 revolution.

Soviet Authorities abolished religious holidays, including Christmas in 1929. However, in 1935, Pravda published an article headlined “Let’s Organize a Nice Fir-Tree for Children for the New Year”.  Holiday trees and gift giving returned to Russian homes on December 31, 1935 (Gregorian). In 1949, January 1st became an official national holiday. 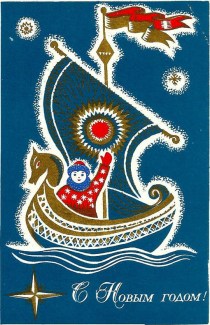 It was during the modernization of Russia that the “Old” New Year’s Day observance was nearly abandoned. However, Russians love holidays as much as everybody else so people made the “Old New Year” observance into a private celebration. January 13th and 14th became extentions of the winter holiday season.

That’s why there are two New Years Days in the Russian Republic. There are also Old New Year’s observances in Serbia, Macedonia, Belarus, Bosnia, Herzegovina, Uzbekestan, and other former Soviet Republics.

The Blue Jay of Happiness reminds us that the New Year will only be a continuation of the Old Year if we retain our habitual ways of thinking.

An eclectic guy who likes to observe the world around him and comment about those observations.
View all posts by swabby429 →
This entry was posted in cultural highlights, History, Politics, religion and tagged Bolshevik Revolution, Gregorian Calendar, Julian Calendar, New Year's Day, new year's eve, Russia, Soviet Union. Bookmark the permalink.