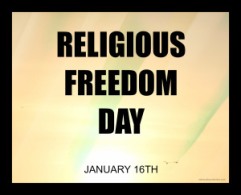 In those days, the mother country, England, required a religious test in order for people to vote, hold public office, or serve as a commissioned officer in the Royal military forces. Any person who was unwilling to sign a pledge of allegiance to the Church of England was disqualified from basic citizenship rights.

Also, some sort of mandatory religious membership or allegiance was required in the rest of Europe, even in the relatively liberal Netherlands, reluctant toleration was the rule of the realm. Members of other European religions, other than Roman Catholicism, or people who had no religious affiliation had no legal civil rights protections.

At last, following the independence of the United States from Great Britain, The State of Virginia’s General Assembly adopted a landmark law on January 16, 1786.  The Virginia Statute for Religious Freedom became the outline of the Establishment Clause of the US Constitution’s First Amendment.

Thomas Jefferson, along with many of the other founding fathers, understood that requiring a religion or a particular religious opinion tends to corrupt the principles of any mandatory religion.  The Virginia General Assembly agreed that “no man shall be compelled to frequent or support any religious worship, place, or ministry, whatsoever.”

By the 20th century, many Christian leaders still understood that the freedom of religion is the guarantee that everybody is free to follow and practice their own particular faith, or no faith at all, without governmental prohibitions or promotion.  Dr. Martin Luther King once said, “[The church] is not the master or the servant of the state, but rather the conscience of the state. It must be the guide and the critic of the

state, and never its tool.”  Likewise one’s religious opinions are not to be used to influence the abridgement of other citizens’ civil rights. To do so would be to violate the establishment clause.

Presently, a vocal group of religionists wish to alter the definition of religious freedom to allow citizens the right to violate civil and human rights of those with whom they disagree.  Religious advocates and legal experts, who have much more influence than I have, are debating the merits and demerits of redefining religious freedom to discriminate.

Those of us who are members of minority communities feel that new state laws that allow “religious freedom” to discriminate are attacks on our hard-won, basic civil rights.  We see the enactment of these so-called religious freedom laws as tearing at the very fabric of the American value of equality.

In a different manner, there is now the problem of the threat of international terrorism making a foothold in the United States.  A popular response has been the promotion of jingoism and xenophobia. There are movements afoot to prohibit believers or perceived believers of Islam from enjoying basic civil rights or even to remain in our country.

How do we deal with people who violate other Americans’ civil rights because they believe their religious tenents advocate discrimination?  How do we curb domestic terrorism without violating the basic civil rights of people who “seem Muslim”?

These are big problems, for which I don’t have a tidy, pat answer or soundbyte. I do think that it is important to avoid violating the hard-won civil rights of any minority citizen.  There should also be respect for the opinions of followers of all religions and people who do not believe in religion.

In my opinion, the boundary should be drawn where the rights of the majority and the minority are enforced. Otherwise, we return to the bad old days of Jim Crow laws, willful discrimination against the LGBT community, and jingoism.

In honor of the enactment of the Virginia Statute on January 16, 1786, our Presidents have proclaimed that our nation willobserve Religious Freedom Day. The way to honor religious freedom is to allow exercise of our beliefs, free from prejudice and

persecution of any sort.

There is still much oversight regarding religious freedom in the United States. Most federal and state officials recognize only Judaism, Christianity, Islam, Hinduism, and Sikhism as organized religions. You may notice that a great many others are frequently overlooked. We should include Native American Spirituality, Buddhism, Deism, neopagan belief systems, agnosticism, atheism, and similar beliefs and non-beliefs as automatically included under the religious freedom “umbrella”.

I believe that National Religious Freedom Day can best be honored by treating other people the way I wish to be treated, with fairness, compassion, and respect. We might call this behavior the “Ethic of Reciprocity”.

Hinduism teaches “Do naught unto others which would cause you pain if done to you.” Bahá’í Faith states, “And if thine eyes be turned towards justice, choose thou for thy neighbour that which thou choosest for thyself.” In Judeo Christianity there is the “Golden Rule”. The Lord Buddha said, “Hurt not others in ways that you yourself would find hurtful.” In Islam, we find, “None of you [truly] believes until he wishes for his brother what he wishes for himself.” In Taoism there is this, “Regard your neighbor’s gain as your gain, and your neighbor’s loss as your own loss.”

The Blue Jay of Happiness practices the very simple ethical guideline of “Live and let live.”

An eclectic guy who likes to observe the world around him and comment about those observations.
View all posts by swabby429 →
This entry was posted in Controversy, Meanderings, Politics, religion and tagged First Amendment, Freedom of religion, relgious freedom laws, religious freedom, Thomas Jefferson, Virginia Statute for Religious Freedom. Bookmark the permalink.