The Road Not Taken (Review) 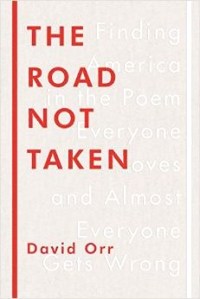 When you see a hardcover version of David Orr’s new book, right away, you notice the transparent dust cover.  The title, The Road Not Taken and the author’s name is printed in red. On the back, you’ll find an excerpt, also in red.  On the light grey cover itself,  printed in large white block letters is this: “Finding America in the Poem Everyone Loves and Almost Everyone Gets Wrong”.  The packaging of the book compells one to pick it up and examine it. It turns out that the unique cover might be seen as an interpretation of the contents of the book’s message.

This slim book contains David Orr’s take on Robert Frost’s famous poem, “The Road Not Taken”. A poem that has influenced American and world culture to some degree.  The casual observer can see the influence of Frost’s poem on other authors, as well.  M. Scott Peck’s self-help book, The Road Less Traveled is one title that comes immediately to mind.

The first chapter of Orr’s book is a biographical sketch about Robert Frost.  It’s useful to have a good understanding of the poet if we are to better grasp the scope of a poem. Here is where we also find out that this poem was inspired by and targeted towards

Frost’s friend failed to understand the humor implied in “The Road Not Taken”. That same failure is also evident in readers of the poem. Many readers apparently misinterpret this poem’s meaning as an underscore of Americans’ belief in human perfectability. Orr says that the take-away for most readers is that people can make choices that “will lead to improvement”. A casual reading of this poem might seem to imply that if a person takes one road, instead of the other, the choice will make all the difference in the world.

However, Orr suggests that Frost’s poem is a view of the “choosing self”. The poem highlights the “dilemma of the crossroads”.  This dilemma is one we all face to some degree whenever we are presented with choices.  Once a choice is made, there might be some second-guessing by the chooser. The focus of the poem is what takes place in the mind when we are faced with the unsettling experience of finding a fork in the road upon which we are traveling.

The thing to remember is, that the choice is made aboat a road, not a path. A road is a man-made thing while a path happens naturally through the processes of animals and humans. So, we might ask ourselves, “When we travel upon one man-made road, what might have happened if we had taken the alternate route?”   This is a ponderous question.  One that is asked by Robert Frost and David Orr. The reader may well ask the question, too.

This little book is a thoughtful, stimulating one.  If you enjoy Robert Frost’s poetry and his most famous one, in particular, you’ll probably get a lot out of Orr’s book. I like this book.

David Orr is widely known as the poetry columnist for The New York Times Book Review.  Orr is also “Professor of the Practice” at Cornell University. He is a winner of the Nona Balakian Citation for Excellence in Reviewing from the National Book Critics Circle. Orr has also received the Editor’s Prize for Reviewing from Poetry magazine.

The Blue Jay of Happiness likes this Robert Frost observation:  “Poets are like baseball pitchers. Both have their moments.  The intervals are the tough things.”

An eclectic guy who likes to observe the world around him and comment about those observations.
View all posts by swabby429 →
This entry was posted in Books, cultural highlights and tagged David Orr, poetry, Robert Frost, The Road Not Taken. Bookmark the permalink.