On March 1, 1872, the United States innaugurated the world’s very first national park. National park status was debated earlier that year before the US Congress voted to set aside over a million acres of public land located mostly in Wyoming and slivers of territory in Montana and Idaho.  The Yellowstone Act of 1872, designated that area as a public “pleasuring ground” to be preserved “from injury or spoilation of timber, mineral deposits,natural curiosities, or wonders within.” President Ulysses Grant signed the act into law on this day of 1872.

We must keep in mind that at that time in American history,  exploitation and settling of lands, west of the Mississippi River, were a high priority.  The precedent of creating an area of the public domain, especially such a large area, was quite an anomaly. Fortunately for posterity, most of the congressmen who supported the Yellowstone Act did so because of their ignorance.  They believed the “primitive”, isolated region was of little or no economic use.

Today, Yellowstone National Park is probably the most famous park in the world.  Just as the original native American inhabitants of that region were intrigued by Yellowstone, so is everyone else.

A few days ago, one of my Lakota friends, Tokala, and I engaged in a conversation about Yellowstone. He told me that many native peoples have lived in the Yellowstone region. Some of them were the Blackfeet, the Crows, Cheyennes, Assinboines, and the Lakotas.

False rumors were spread by early federal overseers of the park.  They claimed that “primitive Indians” feared the geyser regions.  Tokala claims that these rumors 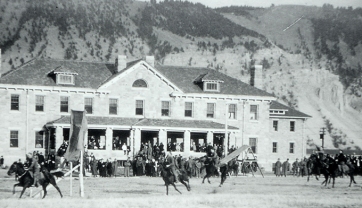 were spread in order to justify clearing the region of its native peoples.  Actually, my friend said that the native people were silent about Yellowstone and did not want the white man to know about it.

Actually, the native people did not fear Yellowstone’s geyser basin at all.  The oral traditions confirm that Yellowstone was an important religious center for these people, so the secret was kept from the white people deliberately.

Tokala recommended that I should look into what the native people originally called the Yellowstone area. So, we went online and rediscovered some of the traditional names of the land. The Flathead Indians call it “smoke from the ground”.  Kiowa Indians refered to it as “the place of hot water”. The Blackfeet say it is “many smoke”. Crow Indians have traditionally called it, “land of the burning ground” and “land of vapors”. Furthermore, the Crows also called the geysers, “sacred and powerful water.” 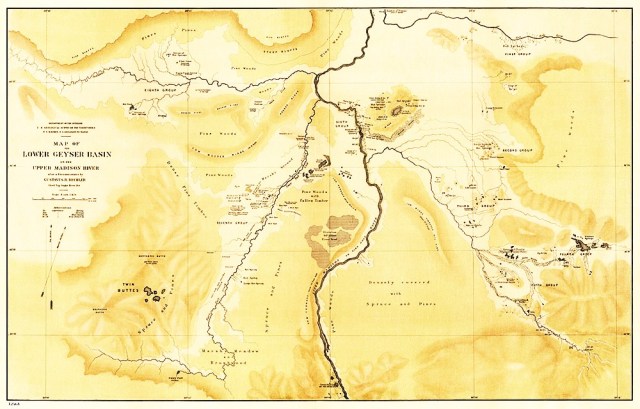 The Lakota and other peoples believed that the geyser basin was the home to many helpful, benevolent spirits. This put to rest, in my mind, the long held disinformation that had been spread by nineteenth century explorers and writers about the native people being afraid of Yellowstone.

My friend knows that I’ve visited Yellowstone National Park at least 13 times (I’ve forgotten the exact number). So he wanted to know if I had had any “spiritual” thoughts about the place.

I told him about a visit my brother Mark and I had made to Yellowstone during the park’s centennial year, 1972.  We pitched dad’s old Army tent at the Slough Creek campsite.  After a light supper, eaten in front of my Coleman lantern, we tucked into our sleeping bags and drifted off to sleep.

At perhaps 1:00 or 2:00 we were abruptly awakened by a loud, steady, middle range tone that reminded us of a tornado siren.  The sound was not mechanical, though. It seemed to be organic  and natural. We were certain of this even though neither of us had ever heard such a sound before then.

The “siren” died down, but we both heard some rustling sounds in the woods.  We attributed them to neighboring tenters who may have also been awakened by the “siren”. Mark and I eventually fell asleep again.

After daybreak, I encountered a park ranger and described the weird sound that came from the forest.  He explained that there was a report of a grizzly bear nearby and that the small animals were alarmed by his presence and made the noise.  What we heard was a chorus of frightened animals.

While Mark and I ate breakfast, we discussed the ranger’s explanation.  I expressed my skepticism about large numbers of animals crying an alarm.  Grizzly attacks are usually isolated events and generally occur in a silent environment.

Several weeks later, I told the story to my best friend’s father. He had had many experiences in the Rocky Mountains, so I figured he could tell me about the “siren”.  Instead, he said the ranger’s explanation was pure bunk.  I was given no further reason for the noise.

The memory of the peculiar, mysterious “siren” still haunts me whenever I think about Yellowstone National Park. I really don’t know whether or not to believe the ranger’s explanation.  The amount of time between 1972 and the present time has probably warped my memory of the event somewhat, too.  Aside from the Park Service ranger and my brother, I’ve never met anybody else who has witnessed the “siren”.

Tokala looked at me with a knowing smile.  He said, “Maybe you encountered one of those powerful, sacred, benevolent spirits.”

The Blue Jay of Happiness likes this anonymous quote: “The human spirit needs places where nature has not been rearranged by the hand of man.”

An eclectic guy who likes to observe the world around him and comment about those observations.
View all posts by swabby429 →
This entry was posted in cultural highlights, History, religion, story time and tagged Idaho, Montana, National Park Service, Native American Culture, Ulysses S. Grant, Wyoming, Yellowstone National Park. Bookmark the permalink.

3 Responses to Thinking About Yellowstone