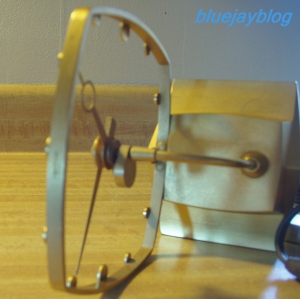 I recently discovered a brand new thrift store in Wayne, Nebraska. While browsing there, I stumbled across an odd-looking electric clock. Of course I impulsively bought the thing; because it was 50-cents, I’d be foolish not to do so.
The “face” is non-existent. Instead there is a squarish frame with twelve small circles attached as markers. On the very top, in small letters, is “Holland”. The hour and minute hands are placed at the end of a curved metal tube. These are attached to a heavy steel base. The base cover is labled “Jefferson Golden Secret”. The clock’s style  reminds me of the Philco “Predicta” televisions from the 1950s. The one that has it’s bare picture tube mounted upon a small cabinet.

I carefully plugged the clock in, once I returned home.  I say carefully, because the power cord was terribly damaged.  The hands did move and the motor was very quiet. I decided to replace the cord and clean up the vintage clock.

Some research was in order.  I searched for “Jefferson Golden Secret” electric clock and found only a few sketchy articles.  There are a couple of pages with repair tips and some photographs. It turns out that the Jefferson Electric Company also manufactured the much more famous “Golden Mystery” clock.  That’s the clock with its hands mounted at the center of a glass disk. I don’t own one of them, but I’ve seen them for sale on eBay.

Replacing the power cord is very simple and straight-forward. Remove the two retaining screws, then the steel cover. Remove the two wire nuts, take off the old cord, then attach the new cord.  (I had to knot the new cord, because the old retaining piece was molded onto the damaged cord.) Reverse the order of disassembly to complete the repair.  Because the clock appeared to run and keep time, I did not take the clock apart.  I didn’t want to risk breaking something I know nothing about. 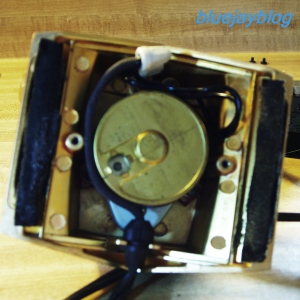 Next, I hauled out my squirt bottle of window cleaner to remove the tobacco smoke film and dirt from all the surfaces.  I used a soft, cotton rag for the large surfaces, and a few cotton swabs for the hands. (The entire clock was plated in 24 karat gold.) Next I glued two strips of felt onto the bottom to replace the dirty, damaged originals.

The final stage was to plug in the clock and allow it to run overnight for a time check.  My clock runs slightly slow so I’ll go ahead and actually use it.

Setting the time is rather frustrating.  I turned the hands to the 3:00 position. Then, at exactly 3:00, I plugged the clock into an AC outlet. By 3:15, the time appeared to be fast, at 3:30 it was behind. At 3:45, it looked very slow. At 4:00 it was only slow by about a minute. This flaw is attributed to the fact that the hands’ gear assembly is mounted on a small counter-weight.   There is a lot of “springiness” and rotational movement when the minute hand is manipulated. I’m guessing this was a design feature to help protect the hands due to a lack of a face and glass cover.

Anyway, I twiddled with the time for an hour, but kept experiencing the time variations. Then, at exactly 6:00, I aligned the hands, perfectly in line. This appears to have solved the problem.  Now the clock has minimal time variations.

While researching maintenance tips for this clock, I found out that the minute hand must be adjusted counterclockwise to set the time. I’ll try this the next time the clock needs resetting.

Although this clock is difficult to accurately set, I’m quite happy with it.  It’s very handsome and luxurious without looking gaudy.

The Blue Jay of Happiness notes that it was the Austrian writer, Marie von Ebner-Eschenbach, who is credited with the saying: “Even a stopped clock is right twice a day.”

An eclectic guy who likes to observe the world around him and comment about those observations.
View all posts by swabby429 →
This entry was posted in Hobbies, Vintage Collectables and tagged electric clocks, Jefferson Golden Secret clock, thrift stores. Bookmark the permalink.