Today, I continue a mini-salute to Haeger Potteries to commemorate their 145th anniversary and their unfortunate decision to shutter their business.  In particular I decided to deviate from my usual Friday format a bit.

My all-time favorite Royal Haeger item is their Leopard console set.  It is composed of two differently posed leopards and a footed planter.

For some unknown reason, Haeger catalogues list the cats as tigers, even though they have no stripes nor are their bodies tiger-like. 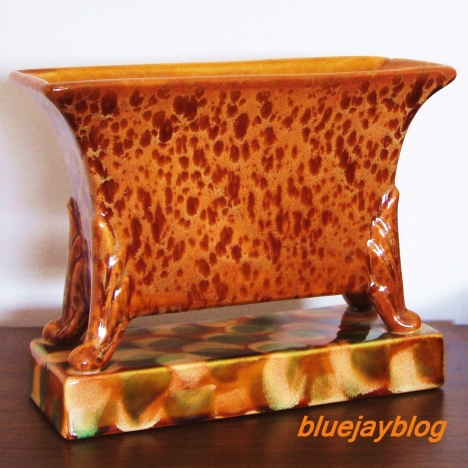 The leopards are perhaps the most famous creations of studio stuylist Royal Hickman.  They are part of an entire line of accessories that include cigarette boxes and table lamps, which I don’t own.

Most leopard statuettes were finished in a leopard pattern glaze, but there was a run of them finished in a solid, grayish glaze that are not as attractive. They’re very difficult to find, so I’m guessing the single color glazed cats are more valuable.

I originally came across my set in 1999 and have displayed it since then, never placing it in storage at all.  Every couple of years I change the semi-permanent arrangement in the planter for the sake of variety.

Today, I decided to go with a red-orange dried tropical arrangement.  It needed to have a narrow, upward shape in order to fit on top of a crowded console display surface.

The finished project fits in well with the mid-century fire orange themed collection of other items.

The Blue Jay of Happiness quotes Friedrich Nietzsche today.  “While dreams are the individual man’s play with reality, the sculptor’s art is–in a broader sense–the play with dreams.”

An eclectic guy who likes to observe the world around him and comment about those observations.
View all posts by swabby429 →
This entry was posted in art, Floral Arts, Hobbies, Vintage Collectables and tagged figurines, Royal Haeger, Royal Hickman. Bookmark the permalink.