Actually, I expected much more long term excitement about the Apple Watch than it has. In some circles, perhaps it has, but not in the general mainstream places on the Web I know of.  What has filtered into my little corner of the Internet are sophisticated automatic mechanical wristwatches. Who knows? Maybe more people are collecting

fancy wristwatches as a reaction to our increasingly electronic culture.

Watch connoisseurs have probably existed ever since the first pocket watches came onto the market.  Evidently this is a hobby for the well-heeled among us. There is now a growing clique of people who collect very expensive non-electronic timepieces. As for myself, I’m quite happy with my small selection of inexpensive quartz movement watches, all of which are very accurate and carefree.

Aside from my need to check the clock-time, the most useful function on my favorite solar powered Timex is the chronograph function.  This stopwatch feature is useful for a few activities I enjoy.  Until the sudden appearance of high-end watch review video thumbnails in my YouTube feeds, I had no desire to investigate accessories beyond my means.  The chances of me buying of “Rolex Oyster 3525 Chronograph” are about the same as me garaging a “Ferrari Gran Turismo Spider” sports car. Dream on. 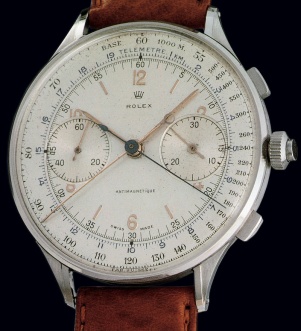 For the uninitiated, “chronograph” is just a fancy word for a timer or stopwatch. Some chronographs, electronic or mechanical, only keep track of small increments of up to half-an-hour while others record up to twelve hours. On analogue watches, these readings are seen on sub-registers, the tiny dials with pointers on the watch face. On simpler chronographs, other means are used. Many LCD digital watches have chronograph functions that are accessed by pressing a “mode” button.

Regardless of whether the watch is a prestige brand or a budget digital, the chronograph or other non-clock features are rarely, if ever, used by most consumers.  Many people buy expensive chronographs only because they look very sophisticated and attractive. I know that my humble Timex chronograph is just as accurate as a Rolex Oyster.  I know, for sure, that I’m more likely to use a Casio for everyday, rugged timing because I’d hate to get an expensive watch sweaty and dirty.

So what’s with chronographs, anyway?

The word “chronograph” lterally translated means, “time writer”; “chronos” is Greek for “time” and “graph” for “writing”.  A person might ask, “What does writing have to do with watches? Why not just use the word ‘timer’?” Well, the first chronographs were operated by using a small pen, attached to the index to mark the dial to show how much time had elapsed. 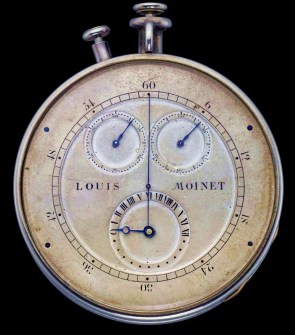 In 1815, artist, horologist, and author of the watchmaking encyclopaedia, Louis Moinet drew up the plans for the first modern chronograph. The finished device was completed the following year.  Moinet intended his chronograph for use with astronomical instruments.

Two years later, King Louis XVIII commissioned the noteable watchmaker Nicolas Rieusser to further develop the chronograph so that the monarch could time horse races. As a result, horse racing was changed forever. The winner was no longer only determined by breaking through the tape first. The chronograph enabled races to be timed and records set.  Of course, other types of sporting events soon utilized the timepiece, too.

In 1844, inventor Adolphe Nicole designed and patented an improved chronograph that utilized a reset function to more quickly enable successive measurements.  By the end of the 19th century, pocket chronographs became very popular among the general public.

It was during the 20th century that timepieces branched off into specialized types like the tachymeter. That type of watch uses a scale that allows the user to measure distance based upon speed or speed based upon travel time.  Eventually, more complicated, specialized chronographs were invented for aviation, marine navigation, Olympic competition, various other sports, deep sea diving, and so forth.

Whether you own a “Timex Ironman Expedition” or a “Breitling Chronomat GMT” you may now want to experiment with the chronograph features.  You can time cooking tasks, time a bicycle race, or calculate your heartrate.  Since you’ve already paid extra for the feature, why not use it?

An eclectic guy who likes to observe the world around him and comment about those observations.
View all posts by swabby429 →
This entry was posted in cultural highlights, Gadgets, History, Hobbies, Science, sports, Vintage Collectables and tagged Adolphe Nicole, chronograph, Louis Moinet, wristwatches. Bookmark the permalink.

2 Responses to Something About Chronographs