When we see the phrase, “new wave”, we may think of the type of punk music of the late 1970s. Fans of international cinema might think of “La Nouvelle Vague”, the new wave film movement of the 1960s. Some people, like me, think of new wave as the conscious movement in art, literature, and politics that purposely breaks away from traditional form. 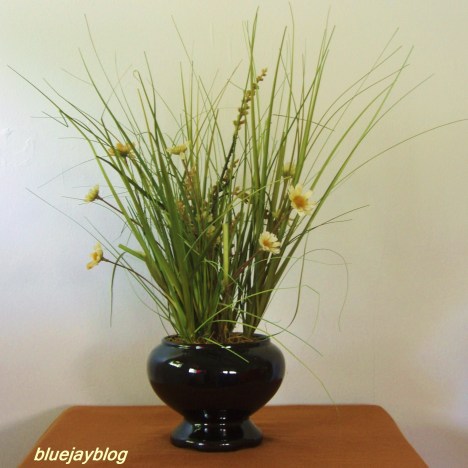 A section of Igor Stravinsky’s “Le Sacre du Printemps” (The Rite of Spring) was being aired on the public radio station as I gathered materials for today’s projects.  I thought about how Stravinsky broke many rules of classical music and how he might relate to the later new wave movement. With Stravinsky in mind, I decided to use slightly mainstream containers in slightly new ways.

The smooth jet-black Frankoma urn vase is the foil for unruly plugs of grasses that seem to be battling their containment.  The unsettled quality of the arrangement is actually in an offbeat balance with itself. 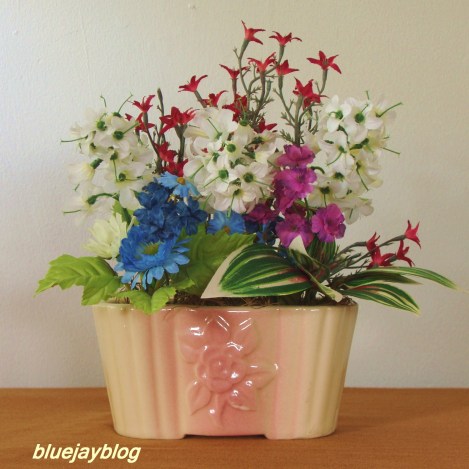 The light pink planter vase suggests a kitschy sort of formality.  So, I created a formal framework then plugged in unexpected shapes, and colors for a subtle new wave effect.

The stamp on the bottom of the circular planter with the seated boy reads, “Made in Czechoslovakia”. The boy seems to be striking an impish pose and expression. In turn, this triggered an unconventional use of a branched succulent. The resulting visual pun reminds me of a psychedelic shade tree.

Why not break out of the traditional box today and take on the day in the spirit of the New Wave?

“Alpha 60–Your name is written ‘Ivan Johnson but it is pronounced ‘Lemmy Caution,’ Secret Agent Zero Zero Three of the Outlands. You are a threat to the security of Alphaville.
Caution–I refuse to become what you call ‘normal’.
Alpha 60–You cannot escape. The door is locked.
Caution–Try to stop me, pal.”

An eclectic guy who likes to observe the world around him and comment about those observations.
View all posts by swabby429 →
This entry was posted in art, cultural highlights, Floral Arts, Hobbies, Vintage Collectables and tagged avant garde, Czech pottery, Frankoma Pottery, Igor Stravinsky, New Wave Movement. Bookmark the permalink.