The First Woman In Space 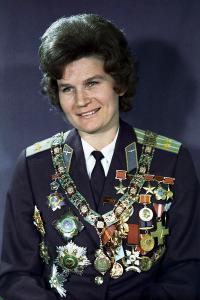 I can almost visualize the scene in Red Square in Moscow back in the spring of 1963. A crowd of thousands of women enthusiastically celebrating the arrival of the first woman into orbit around the Earth.

A year before this jubilant event, leadership at the Kremlin decided, in order to maintain their primacy in the Space race, they had to launch a Soviet woman into orbit as soon as possible. Out of four women selected and trained as cosmonauts, 25-year-old Junior Lieutenant Valentina Tereshkova made it through the final vetting process.

Tereshkova was born in the Yaroslavl Oblast north of Moscow on March 6, 1937.  She was the middle child with two siblings.  The father was a tractor driver and her mother was a textile plant worker. Valentina began her formal education at the age of eight-years-old.  She quit school to begin working in a textile plant, but did continue education with correspondence courses.

Under the direction of premier Nikita Khrushchev, four women were selected for the Soviet Union’s woman in space program. The primary factor that led to Tereshkova’s selection as a cosmonaut was her long-time interest in parachute jumping.

On June 16, 1963, from the Baikonur Cosmodrome, Soviet state television began live video broadcasting of the space mission.  The coverage included a camera placed inside the Vostok 6 space capsule.  At 08:20 UTC / 12:20 Moscow Time, the capsule with Tereshkova was successfully launched.

Soviet technicians, at the time, rated Tereshkova’s in-flight performance and physical condition as adequate not outstanding. She apparently had difficulties with her helmet headset and the bland taste of the food caused a nauseous reaction.

It was later determined there had been a major data fault with the Vostok in-flight program that caused the capsule to climb rather than descend.  New data was provided to correct the landing problem.

The mission was originally planned as a joint venture with two capsules, each carrying a female cosmonaut, however funding cutbacks caused a reconfiguration of the flight. Instead the Vostok 6 mission was the final effort of the Vostok spacecraft program as the Soviets were readying for their new Voskhod series.

As it turned out Colonel Valery Bykovsky was already in orbit in the Vostok 5, launched two days prior.  An attempt to dock both Vostok capsules was scheduled.  The two cosmonauts were within 4.8 kilometres (about three miles) apart but continually drifted apart. That portion of the joint mission was scrapped.

The final statistics show that Tereshkova’s mission took two-days, 22-hours- 50 minutes. The Vostok 6 completed 48 orbits.  This easily beat the then longest United States flight by Gordon Cooper of 22 orbits. After her landing, Tereshkova was awarded the title, “Hero of the Soviet Union”. In addition, she was presented with the United Nations Gold Medal of Peace.

Although Tereshkova only flew one mission into space, she went on to become a spokesperson for the government of the USSR.

(Thanks to Роскосмос (Roscosmos) and NASA for background information.)

The Blue Jay of Happiness likes this quip from Valentina Tereshkova: “Hey sky, take off your hat, I’m on my way!”

An eclectic guy who likes to observe the world around him and comment about those observations.
View all posts by swabby429 →
This entry was posted in cultural highlights, History, Politics and tagged cosmonauts, Nikita Khrushchev, Soviet Space Program, USSR, Valentina Tereshkova, Vostok 6. Bookmark the permalink.