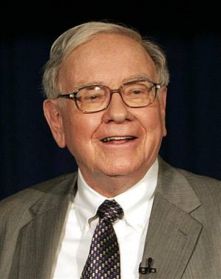 A person living in Nebraska can rarely get by without hearing something about the “Oracle of Omaha”, Warren Buffett. He’s a larger than life character with a cult-like following around the world.  People want to be filthy-rich, just like him. Some Nebraskans believe he is the epitome of Midwestern, common-sense thriftiness and entrepreneurship.

Warren Edward Buffett was born in Omaha, Nebraska on August 30, 1930. He came from a family line of Nebraska businesspeople. His paternal great-grandfather and grandfather operated grocery stores in the state.

Buffett has often mentioned that the Great Depression made a huge impression on him as a boy.  His family suffered financial ruin and his father struggled to co-found Buffett, Sklenicka & Co. The hardships motivated the young boy to become very wealthy. One of the first birthday gifts young Warren remembers receiving was a nickle-plated money changer.  He used it when selling Chicklets to people door to

door.  Later, he resold magazines and bottles of Coca-Cola at a profit. On weekends, the youngster hawked snacks at football games. He started building his fortune at an age when other children were still playing with coloring books and Tinker Toys.

Information about how Warren Buffett and Berkshire Hathaway accumulated immense amounts of cash are legion on the Web, libraries, and book stores.  What intrigues me most about Buffett is his philanthropy.  It’s well-known that Buffett does not plan to bequeath his fortune to his descendents. It will go to his many charities.

The charity that caught my attention is one of Buffett’s favorites, the “Glide Methodist Church and Mission” of San Francisco. The topic of GLIDE is worthy of an entire book. The mission is more than a city institution, it’s a movement. In short, GLIDE works with impoverished and marginalized people. GLIDE is important to the homeless and the LGBT community. Other benefactors include Maya Angelou, Bobby McFerrin, and the late Robin Williams.

GLIDE’s present focus is on poverty, drug abuse, violence, and the emotional suffering these problems cause. GLIDE is unconditionally welcoming to all classes of people, races, sexual orientations, and ages.

So, while much has been said about the “Oracle of Omaha’s” astonishing wealth and influence, Buffett does seem to have his heart in the right place.

The Blue Jay of Happiness likes this bit of Buffett wisdom: “Chains of habit are too light to be felt until they are too heavy to be broken.”

An eclectic guy who likes to observe the world around him and comment about those observations.
View all posts by swabby429 →
This entry was posted in cultural highlights, Hometown, religion and tagged Berkshire Hathaway, entrepreneurship, Great Depression, Omaha Nebraska, Warren Buffett, wealth. Bookmark the permalink.