Howl At The Moon

One of my friends has a “Heinz 57” dog named Loki.  The mutt was purposely named after the Scandinavian God of the same name (not the comic book character).  Loki is the trickster God of ancient Norse tradition. The deity is the offspring of two giants. He is unpredictable, yet dynamic. Loki is the catalyst in many of the ancient myths. The greatly flawed Loki is the reason for change in the order of things. The descendants of Loki were wolves that were prophesied to eventually devour the Moon and the Sun.

Other cultures have their own stories and myths about howling wolves. In ancient Rome, Pliny the Elder wrote about wolves in his book Natural History.  Native American legends include the “Wolf Moon” in January. Packs of hungry wolves supposedly lurked outside Native American villages, howling at the Full Moon on cloudless nights.

Like most dogs, my friend’s canine Loki likes to howl.  He especially howls when he’s lonely, frustrated, or otherwise stressed.  Sometimes the dog just likes to howl for the sake of fun.  The Loki I know seems to be a living link between wolves and humans. When Loki howls, he sounds like a human child.

Lycanthropes, people who believe that they are wolves or werewolves, love to howl at the Moon.  The Lycanthropes and people who just like to pretend they’re wolves come out at night around Halloween.  In this case, howling at the Moon is an expression of fun and enjoyment of entertainment. The spooky stories of Gothic fiction are joyfully re-enacted at this time of year.

Wolves and humans have a long history together.  Our ancestors’ closeness to them led to the domestication of them into the dogs we know and love today.  Is it any wonder that playful human children and drunken college students like to emulate the howling wolf?

The perception that wolves and dogs howl at the Moon is largely a myth.  Scientists who study canines have discovered more practical reasons why the creatures howl, and they don’t include spooky things about the Moon.  Wolf and dog vocalizations can be categorized four ways: barking, growling, whining, and howling.

We’re all familiar with barking. It is used when the creatures sense danger or to 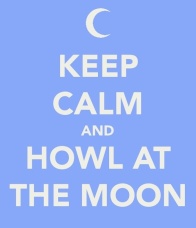 express aggression in defense of territory. Growling is a warning and is one way to indicate dominance.  Whining is the sound of submission to another canine.

Howling is intended for long-distance communication. The howl keeps strangers away and the pack together. Used socially, the howl is used to locate a lost member of the pack, either by the pack as a whole, or the lost, lone wolf. Sometimes wolves and dogs howl, just because they can.

The question of the day is this: Do you sometimes feel like howling at the Moon?

The Blue Jay of Happiness has a spooky quote from Nikita Khrushchev. “If you live among wolves, you have to act like a wolf.”

An eclectic guy who likes to observe the world around him and comment about those observations.
View all posts by swabby429 →
This entry was posted in cultural highlights, Meanderings, religion, Wildlife and tagged dogs, howling, Loki, Norse mythology, wolves. Bookmark the permalink.