2016 has seen an allegations-filled news cycle. The general election has especially been a contentious one.  So many accusations were cast out for public consumption that it has been difficult to  determine which ones are true and which ones are fabrications.

Allegations of wrong-doing intended for public consumption are either libelous or slanderous. In the interest of simplification, I will use the term “defamation”.   Legally, defamation is the statement or publication of information that is false, unprivileged,

has a tendency to injure perception of character, causing “special damage”, and is the individual’s fault in making the claim, amounting at least to negligence. Malicious defamation occurs when the intent to harm the reputation of someone is intentional.

Defamation can happen at many levels. For instance, a family member might accuse you of being a terrible driver. At a more serious level, a commentator might accuse a public figure of being in cahoots with terrorists. Regardless of truth or falsity of the statements, the words can cause a shift in perception by others about the targeted individual.

It was on this date, in 1964, that the civil rights leader, Martin Luther King Junior confronted his accuser. King met with Federal Bureau of Investigation director J. Edgar Hoover regarding the agency’s alleged slander campaign against King. 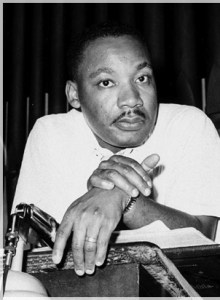 The FBI director created a public furor by saying King was the “most notorious liar in the country”. Hoover made the allegation to a group of journalists just prior to King’s October flight to Oslo, Norway to receive the 1964 Nobel Peace Prize. Because Hoover was the head of the nation’s investigatory bureau, his statement carried extra weight.

Earlier that same year, the FBI apparently sent the civil rights activist an unsigned letter threatening to expose King’s supposed extramarital affairs. The typewritten letter was written in the style of a “disillusioned activist”, but has been thought to be penned by one of Hoover’s underlings,

William Sullivan. The message, sometimes called the “suicide letter”, ends by saying, “King, there is only one thing left for you to do. You know what it is. You are done. There is but one way out for you. You better take it before your filthy, abnormal fraudulent self is bared to the nation.”

During “Freedom Summer” segregationists like George Wallace and Ross Barnett were spreading rumors that accused King of being part of a “communist training school”. They said King “belonged to more communist organizations than any man in the United States.” At the same time that Hoover was calling King a notorious liar, the FBI actually produced information refuting the allegations and statements.

The presence of all this conflicting information being released to the news media caused much confusion to the American public. It may have even ramped-up the emotions of white supremacists who wanted to do away with King altogether.
Even though Hoover alleged that King was a “notorious liar”, he still authorized his agents to accompany King, undercover, to make sure that King was safe from potential murderers.

The example of King and Hoover demonstrates why defamation is such a serious problem. Stretching the truth or outright false information can damage a targeted person or group of people irreparably.

That’s why it’s a good idea to maintain healthy skepticism when reading or hearing about allegations regarding people who might be involved in nefarious events. This is especially true when consuming information from the Internet. The Web environment is rife with “frontier mentality” regarding information of all sorts. Gossip sites that masquerade as legitimate news sources are ready to satisfy confirmation biases we hold.

Defamatatory information is out there, targeting celebrities, politicians, everyday citizens, and maybe you and me.  Defamation, whether it’s libel or slander, is a blight on public consciousness.

The Blue Jay of Happiness is mindful about defamation and gossip. Speaking and writing untruth are the marks of an unskillful, unhappy person. Be skeptical.

An eclectic guy who likes to observe the world around him and comment about those observations.
View all posts by swabby429 →
This entry was posted in Controversy, History, Politics, religion and tagged defamation, gossip, J. Edgar Hoover, libel, Martin Luther King Junior, rumor, slander. Bookmark the permalink.

2 Responses to Thoughts About Defamation