I arrived home from running errands and noticed the small box on the porch step near the front door. I actually said out loud, “It’s about time!”  The package was supposed to have arrived several weeks earlier, according to the premiums fulfillment company. 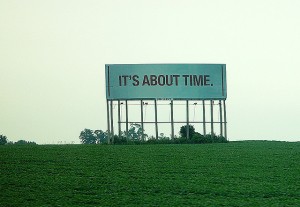 I had been part of a very long-running consumer survey that awarded points for every survey turned in on time. When redeeming my award points, I chose a new point and shoot camera.  After submitting my choice, the website said to allow two to three weeks for delivery. That’s why I was so happy to see the box when it finally arrived more than a month later.

A silly quote from Oscar Wilde came to mind as I sat down this morning to write today’s post. “I never put off till tomorrow what I can possibly do… the day after.” I wonder if this motto appears in the hallways of premium redemption centers.

In this day and age of instant gratification, just about any minor delay elicits the response, “It’s about time!” Is a delay legitimate or does it come about by somebody’s habit of procrastination?

It wasn’t that many years ago that I had dial-up Internet service at home. I finally got tired of some web pages taking a minute or longer to load. Then I decided to get broadband service. When I informed my friend Jorge, he reflexively said, “It’s about time!” We both had a good laugh about his comment.

We think or say, “It’s about time” without giving it much thought. It’s like when someone sneezes, and we say “Gesundheit” or “bless you”.

The idiom is a healthy way of expressing our exasperation and frustration while waiting for something that has been long delayed. It’s a familiar refrain at airports and restaurants.

If we take a mindful moment before saying “It’s about time”, we might use the delay as a way of practicing patience.  Take a phrase from Leo Tolstoy, “The strongest of all warriers are these two–time and patience.” In our day to day lives, it often seems that there is not enough time to do everything that needs to be done.  This leads to feelings of being squeezed for time and becoming stressed.  It might also be a signal to think about time management. How can we adjust our routines to minimize time-related stress and emphasize patience? 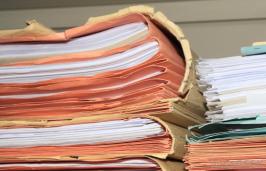 We might think of life not as a series of tasks and deadlines, but instead, as an art. A great work of art takes time and patience. Great art is not hurried yet the artist does not procrastinate in creating it. Great art comes about in its own time.  If you want to say, “It’s about time” less often, just give yourself the gift of patience.

The world goes about its ways on its own schedule.  Individually, we have little influence about many outcomes. What we can influence, we should do so as soon as is practical, not until later.

The Blue Jay of Happiness remembers a friend telling him, “Life is not a race, just continue the chase and try to be an ace.”

An eclectic guy who likes to observe the world around him and comment about those observations.
View all posts by swabby429 →
This entry was posted in Contemplation, Health, Meanderings and tagged delays, impatience, patience, procrastination. Bookmark the permalink.