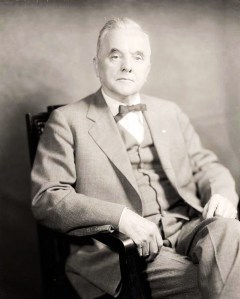 He was probably the greatest politician to ever represent the State of Nebraska. George W. Norris is fully responsible for many great accomplishments of the 20th Century and can take partial credit for many others. Even though he is of monumental importance in Nebraska history, his greatest influence was in the Federal government. Hence his works are studied by political scientists around the world.

George William Norris was born on July 11, 1861 in Ohio. He spent his boyhood in that state. After he earned his law degree, Norris went west to Washington Territory briefly then decided to move to the Great Plains. He established his law practice in McCook, Nebraska. Norris was elected to the U.S. House of Representatives in 1902. Ten years later, he began serving in the U.S. Senate.

conservative in nature. Norris was the leader of the Progressive wing of the party. He felt it was his calling to vote according to his conscience even though his views sharply contrasted with those of the party bosses or public opinion.

Students of Nebraska history know Norris as one of the prime movers and shakers who promoted the idea of the Unicameral State Legislature. Nebraska remains the only state in the union with this form of representative government.

Norris’ autobiography has been on my “to read” list for many years, but new books kept crowding it down towards the bottom.  The Norfolk (Nebraska) Public Library is where I found the “Scholar Select” historical manuscript version of the book on the New Releases shelves. That’s when I decided to bring it home.

Fighting Liberal: The Autobiography of George W. Norris is an excellent summary of his life and his major accomplishments. Anyone who is interested in U.S. politics or who is contemplating running for office will find many important lessons in this book.

I had expected to find a dry, boring book. Even though it is written in the style of the early 20th Century, the autobiography is compelling and holds the reader’s interest throughout. Time and again, I found myself wishing that George Norris was still alive and active today.

Among the pages is Norris’ disillusionment of the Warren G. Harding administration. The Nebraskan had voted for his fellow Republican for President and held high hopes. Norris described the situation this way:

“In the Senate, he {Harding} had been a dependable conservative in all of his thought and his votes. In the White House, he symbolized Ohio political machine politics.

There came in Washington on the heels of this new administration a curious crew, with an amazingly blunted, repulsive conception of public service and the responsibilities of public office.

Even more significant, the currents of national thought reversed themselves. Great wealth took possession of the government. It was reflected in Mr. Harding’s selection of a cabinet.  It characterized all political utterances. The stock phrase, ‘Less government in business and more business in government’ was, I recognize, a natural reaction against the regimentation of people in wartime.”

I wondered what Norris might think about the current President-elect and his cabinet choices.

The autobiography goes into some detail about Norris’ involvement or concerns about such events as the “Teapot Dome” scandal, Senate filibusters, his advocacy for the Tennessee Valley Authority, his differing views about the two World Wars, agriculture, and his thoughts about world peace.

If you enjoy reading about positive individuals who arise from poverty into successful, noteworthy historical figures, this book is for you. If you are a student of political science, this book has been studied by scholars in many nations who aspire to public service.

{ Fighting Liberal: The Autobiography of George W. Norris; 480 pages, published by Scholar Select; originally published in 1945 by The Macmillan Company }

The Blue Jay of Happiness quotes George W. Norris. “I think we ought to take the world as it is and not as we would like to have it. “

An eclectic guy who likes to observe the world around him and comment about those observations.
View all posts by swabby429 →
This entry was posted in Books, Controversy, History, Politics and tagged George W Norris, Nebraska, Ohio, politics, US Congress, Warren G Harding, Washington Territory. Bookmark the permalink.