Today, I want to send special greetings to my readers who live in India or those who have Indian ancestry. I hope you have a Happy 68th Republic Day.  The few weeks I spent in your country positively affected how I think about the world and your amazing nation. I discovered that the old saying, “India will change your life” is true. The term “Indophile” certainly applies to me.

Many North Americans are unaware of today’s holiday and exactly why it is not only important to Indians but why people in other nations may also wish to celebrate Republic Day, today.

Just as the United States and Canada became independent of British rule, so did India.  However, India’s struggle for freedom from colonization was much longer and was achieved in a much different way than did independence in the US and other former territories of the British Empire.

Republic Day is one of India’s most important holidays on the calendar. On January 26, 1950, India’s national constitution was officially enacted. On that day the modern nation of India, as we know it, became a Sovereign Democratic Republic, and the world’s largest democracy.

Westerners might mistake today’s holiday with Indian Independence Day.  That holiday is celebrated on August 15th.  This year, Republic Day will take a back seat to Independence Day because this year is a momentous anniversary for India. On August 15, 1947, India finally achieved its freedom from Great Britain. That means 2017 is the 70th anniversary of independent nationhood for India. 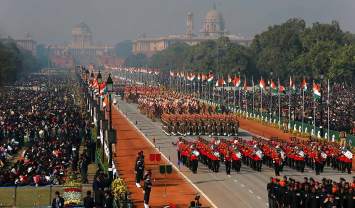 In the meantime, Republic Day, today, is a very patriotic national holiday that commemorates the unity and solidarity of all Indians, regardless of regional and cultural differences. This holiday is billed as “a day of the citizen”.

Although India had been an independent nation since 1947, many of the country’s institutions were modernized on the very first Republic Day. India’s first President, Doctor Rajendra Prasad, was elected to office on that day. The word “Royal” was removed from the name of the Indian Air Force on January 26th. The national animal, the ancient depiction of the lion head, was adopted as well on this date in 1950.

India will celebrate Republic Day with patriotic speeches and festive parades in each state. There will also be the traditional grand parade in Delhi with contingents from the military forces and colorful floats from all of the states, as well.

The Blue Jay of Happiness quotes India’s 13th President, Pranab Mukherjee, “Our Federal Constitution embodies the idea of modern India: It defines not only India, but also modernity.”

An eclectic guy who likes to observe the world around him and comment about those observations.
View all posts by swabby429 →
This entry was posted in cultural highlights, History, Politics and tagged British Empire, Constitution of India, Democrati Republics, India, Indian Independence Day, Indian Republic Day. Bookmark the permalink.