Two years ago, I decided to go through some of the numerous slides that have been filed away in carousels stacked in the storage closet.  Nearly all of them were shot about three decades ago, when I went through a photography phase. I had invested a considerable amount of time and cash in the hobby.

It seems like a shame that all that effort had been nearly forgotten. Some of my friends urged me to share my work from those bygone years.  How was I to share the images? I don’t have a darkroom nor sophisticated duplicating equipment.  My budget prohibits me from hiring a professional duplicating service to convert the conventional slides into digitally formatted pictures.  Each year I wait, the slides will physically degrade and I will probably lose interest. What was I to do?

My flatbed document scanner came with a slide copying feature that plugs into a port.  Unfortunately, all it did was duplicate a slide’s actual tiny size.  When the scanned image was magnified to normal size, the image was nothing more than pixilated trash. Not only were the resulting images terrible, the process of conversion was very time consuming.

The only logical choice was to project the slides and take individual pictures of each one with a digital camera.  So, out came my barebones Kodak 4200 Carousel projector from storage. Then I set up the old projection screen. I placed my best digital camera on a tripod and positioned it behind the projector–aiming it at the screen. I took pictures of a dozen or so projected images then downloaded them to the computer.

The resulting images were far better than those from the HP scanner.  However, there was a peculiar grainy appearance and a glittery quality to some of the darker slides. 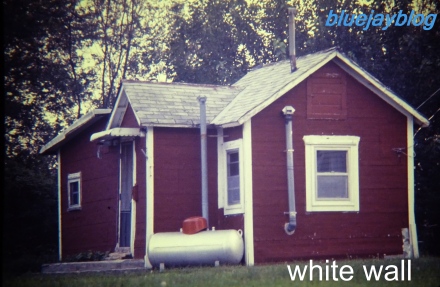 I attributed the graininess to the screen. So I projected the same slides directly to the white wall in the living room, then downloaded the images to the computer. These images were much better.  I began sharing pictures with friends via email, Facebook, and on this blog.

Each time I used the carousel projector to copy slides, I worried about the halogen bulb. It had been in the projector since before 1990.  Replacements are expensive, so I used the projector carefully and sparingly. Meantime I kept an eagle eye out for a cheap spare.

Last spring, my favorite thrift store had placed an “Innovative Technology” (“IT”) film scanner on a shelf. Whoever donated it, had put it in an old shoebox along with its film holders and some USB cords. For $6.00, I couldn’t go wrong.  I brought it home and tried it out.

The resulting images were very similar to those that were projected on the wall.  On the other hand, the darker slides did not process very well, at all. However, the “IT” scanner was fast and direct. The thing became the default slide processor. Any dark slides would just have to go through the Kodak projector.

On the last week of 2016, during a visit to the thrift store, I saw a stack of about a

dozen old Kodak Carousel projectors with leatherette carrying cases, a spare tray, and accessories. They had been given to the thrift store by the modular homes manufacturing factory.  Apparently their sales staff used them to promote the various houses they build.

Each leatherette encased projector was marked $5. I went through the stack and selected the cleanest, nicest projector to bring home. While unpacking the unit, I discovered a brand-new spare projector bulb.  Even if the projector didn’t work, my money was very well spent. 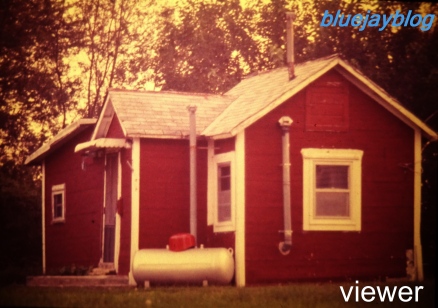 The projector turned out to be a top of the line, 5600 unit and included a pricey zoom lens, autofocus, and timed, auto advance. While setting the projector up to try it out, I noticed it also featured a hidden, slide-out mini viewer screen. Everything worked beautifully. I then packed it away again because it was the holiday season so there was no time to play with the projector yet.

There was finally plenty of time to tinker with slide duplicating, this week.  Out came the Kodak 5600.  The first experiment was to photograph an Ektachrome 200  image projected onto the built-in mini viewer. I used a mid-tone picture of a little house as the control slide.

Next, I retracted the mini viewer and installed the zoom lens. I projected the slide of the little house onto a white wall in the living room from four-feet away. The 5600 projector has two light intensities, so I took pictures at both levels.

After that, I placed the slide into a tray and captured it with the “IT” scanner.

Once the images were in the computer I was able to see which techniques will work for reasonable duplication. No matter how I tweaked it, the image from the mini viewer was simply unsatisfactory.  The projected image at the highest intensity looked overexposed and washed out. The low intensity picture was identical to that from the “4200” projector. It was also comparable to that from the “IT” scanner.  The wall projected image has less blue-cast and is more true to the original than the “IT” scanned slide.

Until another piece of equipment crosses my path, it looks like the Kodak 5600 projector and a white wall will be the default slide duplicating technique for my slides.

The Blue Jay of Happiness prefers an old fashioned slide show over a Power Point presentation any day.

An eclectic guy who likes to observe the world around him and comment about those observations.
View all posts by swabby429 →
This entry was posted in Gadgets, Hobbies, photography, projects and tagged cameras, scanning, slide duplication, slide projectors, slides. Bookmark the permalink.