It’s Hard To Be Humble

During your silent time, have you ever thought to yourself, “Whatever has become of simple humility?”  This may come from a hunger to live in a culture that doesn’t value superiority and superlatives nearly as much as ours does. 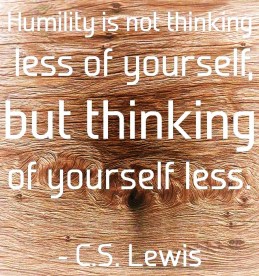 Certainly, advertising has many faults and flaws.  Among them is the promotion of the idea of superiority along with subtle and not so subtle elitism. Even advertising that touts the “averageness” of a product, promotes the idea that that product is more average and humble than any other.

Bragging is seriously exhausting. After spending a workday dreaming up new ways of using superlatives proclaiming our clients’ goods and services are the most wonderful goods and services available on the market, I often wanted to go home to an unremarkable, simple place in my house and in my head.

Working in a superlative driven business within a culture that is obsessed with superiority can be spiritually draining if one is not self-aware.  In the end, the struggle to be leader of the pack is futile. The business of superiority is a fickle, empty one.

What nearly every wisdom tradition says about the pursuit of fame and fortune is true. This endless drive cultivates envy and hunger for power. I think of a pithy thought

What makes a person truly humble and not merely display a façade of humility?  One should not mistake inadequacy and insecurity for humility. Just as pieousness and arrogance have nothing to do with greatness, a false front or insecurity have nothing to do with humility.  When we ponder humility, we encounter one of those slippery virtues that disappears the moment we claim to possess it.

A person should also be on guard against spiritual pride. To think that one’s own spiritual or religious path is the one true way to enlightenment or goodness is not the key to unlock the mystery of humility. To be sanctimonious is not the way to manifest 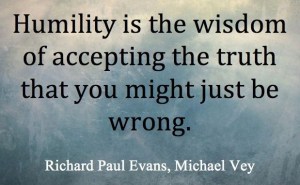 humility. Mahatma Gandhi said something to this effect. “It is unwise to be too sure of one’s own wisdom. It is healthy to be reminded that the strongest might weaken and the wisest might err.”

To be humble is to keep the mind open to other points of view, even those that may cause discomfort. Even if those points of view are not  good fits for oneself, they enable understanding about the nature of others. The ability to alter one’s personal prejudices is a sign of humility in action. Here is yet another quote. This one from Hermann Hesse illustrates how we view other people. “It is not for me to judge another man’s life. I must choose, I must spurn, purely for myself. For myself alone.”

An eclectic guy who likes to observe the world around him and comment about those observations.
View all posts by swabby429 →
This entry was posted in Contemplation, Health, religion and tagged humility, inferiority, prejudice, pride, superiority. Bookmark the permalink.